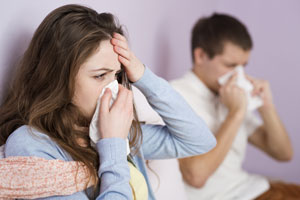 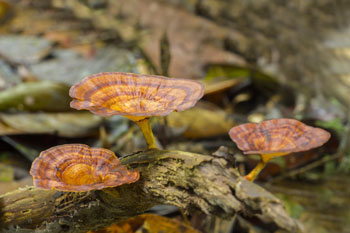 As I noted in Preventing the Flu Naturally Part One, the most important thing to avoid all illness, not just the flu, is to keep your “terrain” healthy. This means maintaining a healthy diet, and eating more alkaline foods rather than acidic ones. But, if an invader should breech our defensive walls, it is up to our immune system to take up the fight. In the next two parts I will discuss some of the best substances that you can take to keep your immune system functioning at an optimal level, beginning with Medicinal Mushrooms.

A Strong Immune System: The Key to Fighting Colds and Flu

Two of the best tonics for maintaining long term general immunity are Medicinal Mushrooms and the Chinese herb Astragalus, both of which are available in NutriStart’s ImmuneStart product. General benefits provided by ImmuneStart include:

-support for chemotherapy and radiation treatments

However, when we take a closer look at each of the mushrooms found in this formula, it becomes obvious that the benefits range well beyond basic immune support.

ImmuneStart contains 6 of the best-researched medicinal mushrooms, grown organically and concentrated for optimal effectiveness. These are:

ImmuneStart uses pharmaceutical quality, concentrated extracts of mushroom mycelium, extracellular compounds, fruiting bodies and spores.  It takes over 250 pounds of mushrooms to create 1 pound of ImmuneStart’s patented mushroom extract (trademarked as Immune Assist). Each recommended dose (4 caps) contains over 560mg of soluble beta-glucans and polysaccharides.  The beta-glucans and polysaccharides found in medicinal mushrooms stimulate the production of immune cells to guard our body’s cells against foreign invaders, protecting us from aberrant and abnormal cell growth.

Many products derived from medicinal mushrooms are based on well-researched, isolated fractions of some of the immune-enhancing polysaccharides found in these fungi. While the ImmuneAssist combination that we use in ImmuneStart does not isolate these fractions, at the expense of other important components, it does still contain them. All these compounds are marketed for immune enhancement and cancer support. They include:

The Science on Medicinal Mushrooms

I took a tour through PubMed (the best free online site covering scientific studies from around the world), and while the following material will be technical, it does serve to show the considerable proof that each of these mushrooms individually has a powerful supportive effect on immune function. By combining them all we have a formula that not only is a superior immune supportive, but also offers a wide range of additional health benefits.

Agaricus Blazei, a mushroom native to Brazil, and widely cultivated in Japan for its medicinal uses, is considered one of the most important edible and medicinal species of mushroom. It is known by many names including Almond Mushroom (based on its taste and fragrance), Mushroom of the Sun, God’s Mushroom, Mushroom of Life, or Royal Sun Agaricus.

Traditionally Agaricus has been used to treat many diseases including atherosclerosis, cancer, dermatitis, diabetes, hepatitis, and high cholesterol. In both laboratory and human studies Agaricus has been shown to regulate the immune system, and to prevent damage to DNA, although the biological pathways by which it accomplishes these activities are still not clear.

Studies have shown that Agaricus has benefit in treating 12 forms of cancer and, this mushroom is known to have antiviral properties in cell culture, though no human studies have proven this yet.

For our purposes here, showing that this mushroom will be of benefit in preventing the flu, we have one study that tested an extract of Agaricus against the polio virus (in a cell culture) and concluded that:

“These results corroborate that (agaricus extracts) can be a rich source of potential antiviral compounds.”   (Study)

And we have another study that proves that Agaricus extract protects against Streptococcus Pneumoniae, the bacterial cause of pneumonia. Now, while pneumonia is a bacterial infection, as opposed to the viral infection of the flu, it is good to remember that during the Spanish Flu epidemic (1918), the majority of those who died succumbed to the pneumonia that was a byproduct of the flu, not from the flu itself.

This anti-pneumonia study determined that the protective effect of Agaricus extract was due to supporting and activating the immune system. And, this is the first report of anti-infection effects of Agaricus in live animal tests. The conclusion was:

“Our results suggest that (Agaricus) extract may be useful as additional prophylactic and possibly therapeutic treatment against bacterial and possibly other infections in humans.”    (Study)

Cordyceps originates as a fungus that parasitizes the larvae of ghost moths, and produces a fruiting body. Thus, it is known in English as “caterpillar fungus”.  Cordyceps has been used for at least 2000 years for its reputed abilities to treat fatigue, cancer, erectile dysfunction, and diseases related to the kidneys and the lungs.

It is currently very popular with endurance athletes, in part due to a story that broke after the 1993 Olympics, when the Chinese women’s track and field team broke multiple world records. While some suspected that the athletes were using steroids, it was revealed by the Chinese authorities that all the members of the team were made to consume a special drink made from Cordyceps. Their winning streak was attributed to this fungus cocktail, along with a vigorous training program.

Traditionally, Cordyceps was harvested by hand from the mountains in Tibet and the Himalayas, and as a result of its rarity, and the difficulty in harvesting it, Cordyceps was also treated as a status symbol. Currently it is cultivated in laboratories, ensuring a sterile environment and a hygienic product.

The immense amount of scientific research done on the various species of Cordyceps, reveals a host of health benefits, as indicated by this study:

“The aim of this article is to review the chemical constituents and pharmacological actions of Cordyceps species…They include anti-tumour, anti-metastatic, immunomodulatory, antioxidant, anti-inflammatory, insecticidal, antimicrobial, hypolipidaemic, hypoglycaemic, anti-ageing, neuroprotective and renoprotective effects.”   (Study)

For our purposes of flu and cold prevention we have a mouse study that used the H1N1 virus, and concluded that:

Maitake (Grifola frondosa), which means “dancing mushroom”, is a polypore mushroom that grows in clusters at the base of trees, particularly oak trees. It is native to northeastern Japan, and North America, and is prized in traditional Asian medicine as an aid to balance out body systems that are not functioning normally, especially for malfunctioning immune systems. It is widely eaten in Japan, and its popularity in Western cuisine is growing.

Research indicates that Maitake has the ability to regulate blood pressure, glucose, insulin, and both serum and liver lipids, such as cholesterol, triglycerides, and phospholipids. Laboratory experiments have shown that Maitake can cause cell death in various forms of cancer cells and inhibit the growth of various types of cancer cells. Small scale human studies done with cancer patients revealed that a portion of the Maitake mushroom, known as the “Maitake D-fraction”, possesses anti-cancer activity.

Shiitake (Lentinula edodes) is an edible mushroom native to East Asia, which is cultivated and consumed in China, Japan and Korea, and has been since prehistoric time. Also, considered a medicinal mushroom, it has been traditionally used to treat upper respiratory diseases, poor blood circulation, liver trouble, exhaustion, and to boost “chi” (life force). Shiitake is also believed to prevent premature aging.

Glucans are the most researched polysaccharide found in mushrooms, and their role in stimulation of immune reactions has been studied for decades. Natural beta-glucans, isolated from yeast, grain or mushrooms, have been proven to modify biological responses, especially to significantly stimulate defense reactions against infections and cancer. Alpha-glucan-containing substances have demonstrated an ability to enhance immune functions.

-“We found significant stimulation of defense reaction. In all cases, the most active was the Maitake-Shiitake combination, with Maitake alone being the second strongest, followed by Shiitake on its own and AHCC. Short-term oral application of natural immunomodulating glucans from Maitake and Shiitake mushrooms strongly stimulated both the cellular and humoral branch of immune reactions.” (Study)

Coriolus versicolor (also known as Turkey Tail) is a medicinal mushroom widely prescribed for the prevention and treatment of cancer and infection in China.

Admittedly, I can find no science on Coriolus being specifically antiviral, but it has clearly proven itself to support the immune system and to protect the DNA from damage, both of which are of help in dealing with influenza.

-“Scientific evidence has shown Coriolus versicolor (also known as Yunzhi) has the role of immunomodulator in therapeutic effect. The aim of this in vitro study was to investigate the antioxidative effect of Yunzhi and to explore the mechanisms behind its DNA protection. A direct antioxidant effect of Yunzhi against oxidant challenge on the DNA of lymphocytes was evidenced.”  (Study)

-“A protein-bound polysaccharides (PSP) isolated from Coriolus versicolor in Shanghai, at the concentrations of 100-800 micrograms/ml promoted lymphocyte proliferation. The results suggest that the anti-tumor effects of PSP may be related to its potentiation of host immunological responses.”  (Study)

Reishi mushroom (Ganoderma lucidum), has been used medicinally in traditional Chinese medicine for over 2,000 years. In China Reishi is known as Lingzhi, or Chizhi in the case of Red Reishi, which is the type of Reishi that is the most medicinally active, and the most commonly cultivated variety.

Since it is tonic to the whole body, supporting all of the organ systems, it was seen as the single most important herb for Chinese longevity. As well, because of the mystical powers that it supposedly granted to those who consumed it, Reishi was also known as the “Mushroom of Immortality”, “Elixir of Life”, or “Mushroom of Spiritual Potency”.

Such names give us a clue to just how valuable Reishi was perceived to be, as does this quote from an ancient Chinese medicinal text: “It positively affects the life-energy, or Qi of the heart, repairing the chest area and benefiting those with a knotted and tight chest. Taken over a long period of time, agility of the body will not cease, and the years are lengthened to those of the Immortal Fairies.” (If you are as intrigued by “Immortal Fairies” as I was this link will tell you more about what they represent.

Immortal Fairies aside, modern research has found a host of more practical benefits that can be attributed to Reishi mushroom. It is used for “boosting the immune system; viral infections such as the flu (influenza), swine flu, and avian flu; lung conditions including asthma and bronchitis; heart disease and contributing conditions such as high blood pressure and high cholesterol; kidney disease; cancer; and liver disease. It is also used for HIV/AIDS, altitude sickness, chronic fatigue syndrome (CFS), trouble sleeping (insomnia), stomach ulcers.”

Other uses include treating arthritis, hepatitis, neurasthenia, atherosclerosis, diabetes, and anorexia, as well as reducing stress and preventing fatigue. “In spite of the voluminous literature available, G. lucidum is used mostly as an immune enhancer and a health supplement, not therapeutically.” (Study)

There is considerable evidence to support the immune stimulating activities of Reishi via induction of cytokines and enhancement of immunological effects (Wang et al. 1997; Zhu and Lin 2006). Different components from Reishi were proved to enhance the proliferation and maturation of T and B lymphocytes, splenic mononuclear cells, NK cells, and dendritic cells in culture in vitro, and in animal studies. (Bao et al. 2001; Cao and Lin 2002; Zhu, Chen, and Lin 2007; Ma et al. 2008)

While mushrooms absorb nutrients phenomenally well, they also can absorb and store fungicides, heavy metals, pesticides and radiation. Therefore it is critical that when using any mushrooms, whether culinary or medicinal, that you buy organically grown ones.

In part three of this series I will cover the Astragalus component of Immunestart and look at the anti-flu benefits of green tea. 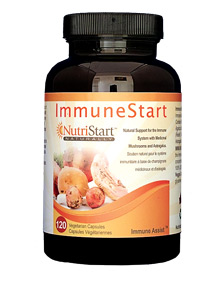 Supercharge your Immune System with ImmuneStart Astragulus and 6 Mushroom Combo

ImmuneStart is one of the most potent immune supplements available.  It contains the legendary herb astragulus and 6 of the world’s most treasured mushrooms.  ImmuneStart combines these scientifically researched nutrients to provide extraordinary immune support.