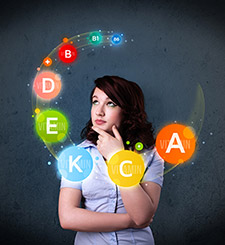 (In scientific terminology, 25(OH)D refers to 25-hydroxyvitamin D, the  form of vitamin D measured in the blood and the measurement is expressed as ng/ml.)

In 2010 Life Extension Foundation published an interview with Dr. Michael Holick, considered the world’s foremost researcher on the benefits of vitamin D. Michael F. Holick, PhD, MD, is a professor of medicine, physiology, and biophysics at Boston University Medical Center, and is also the director of the General Clinical Research Unit there. He is either directly, or indirectly, responsible for most of the studies that have shown how genetic receptors found throughout the body use vitamin D to reduce the risk of cancer, depression, diabetes, and heart disease.

In his book “The Vitamin D Solution”, Dr. Holick recommends that we maintain a blood level of 25-hydroxyvitamin D of between 40-60 ng/mL, the range at which most of the health benefits occur. To attain this, Dr. Holick says that he practices sensible sun exposure, when the sun provides sufficient light to make vitamin D in the skin and, as well, he takes 2,000 IU of vitamin D as a supplement, along with 400 IU from a multivitamin, and drinks 3 glasses of vitamin D fortified milk every day. This maintains his blood level of 25-hydroxyvitamin D in the range of 40-50 ng/mL.

Now let’s see how Dr. Horlick’s recommendations compare to what other research suggests is an optimal amount of vitamin D for general health and longevity.

A research paper titled “Vitamin D and All-cause Mortality” evaluated more than 3,000 subjects and concluded that serum levels of vitamin D at less than 20 ng/mL “were associated with an almost 2-fold increased risk of all-cause mortality compared to patients with 25(OH)D levels  greater than 30 ng/mL.”

Another study did data analysis of more than 13,000 adults in the National Health and Nutrition Examination Survey. It found that subjects with 25(OH)D levels  less than 17.8 ng/mL were likely to have a 26% increased risk of mortality compared to individuals with 25(OH)D  greater than 32.1 ng/mL.

And, yet another study, of nearly 11,000 subjects, further confirmed this statistical trend. Here 25(OH)D levels less than 30 ng/mL were associated with a greater than 1.5-fold increased risk of all-cause mortality, when compared to patients with levels greater than 30 ng/mL. On the other hand, vitamin D supplementation (ranging between 1000 IU/day to 50,000 IU biweekly), was associated with a 60% reduction in the risk of all-cause mortality.

The conclusion drawn was: “Consequently, intake of ordinary doses of vitamin D supplements seem to be associated with decreases in total mortality rates.” When we think back to the conclusions drawn from the flawed New Zealand study that I debunked in the last blog, this statement becomes all the more meaningful. Interpretations of the New Zealand study often concluded that there was no value in supplementing with vitamin D, but, even if they were correct about it having no effect on bone density, mortality studies clearly indicate that even low doses of vitamin D can help prolong life in a statistically significant manner.

Dr. Holick points out that people who are obese have so much body fat that the vitamin D gets trapped in the fat, and is no longer bioavailable. His work showed that obese adults exposed to ultraviolet light, or given oral doses of vitamin D, only raised their blood level to less than half that of a person with normal weight. Therefore people who are technically obese need to ingest at least 2 to 3 times more vitamin D than the average person, in order to attain the same blood levels. We can take this to imply that even those who are overweight, without being obese, should probably take more than average amounts of supplemental vitamin D.

It is clearly safe to take 1,000 IU to 2,000 IU of vitamin D3, in supplemental form, on a daily basis, but to truly know if you need more, you pretty much need to get a blood test. In the next blog I will look at how safe it is to self-prescribe, and dose with higher levels, and what you can do to ensure that this is done safely. Following that blog, I will examine how and where you can get your blood tested for vitamin D levels.