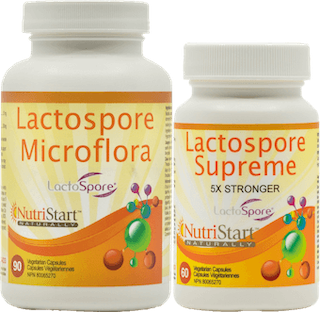 • Lactospore restores gastrointestinal balance through inhibiting pathogens and encouraging good bacteria to thrive.
• Clinically effective in the management of gastrointestinal problems associated with infections, or the use of antibiotics.
• Proven value in the treatment of diarrheal diseases, and constipation, in populations of all ages.
• Stable at room temperature, naturally resistant to stomach acid.

Lactobacillus sporogenes was isolated from green malt in 1949, by Japanese researchers, and was later reclassified as Bacillus coagulans. Bacillus coagulans (marketed as Lactospore®) is a shelf stable (at room temperature) probiotic, with clinically documented efficacy in supporting health and wellness.

Lactospore works on restoring gastrointestinal balance through competitive inhibition of pathogens, the production of L-(+) lactic acid and hydrogen peroxide, and production of bacteriocins, a sort of natural antibiotic that suppresses the growth of putrefactive bacteria.

Being in spore form, this culture survives and proliferates in the gastrointestinal environment more easily than most other probiotics. Lactospore also produces only the beneficial L-(+) form of lactic acid in the gastrointestinal tract, unlike some other probiotics that also produce D-(-) form of lactic acid, which has been associated with metabolic acidosis.

Clinical efficacy of Lactospore has been shown in the management of gastrointestinal problems associated with infections, or the use of antibiotics. Conditions include diarrheal diseases and constipation, as studied in populations of all ages, including infants, and promising results in the management of allergic skin diseases (eczema) in infants, were observed.

There is no need for LactoSpore® to be enteric coated. The strain survives stomach acid and travels to the gut where it becomes active, and Lactospore, because it is a spore and not bacteria, does not need to have high numbers in order to be effective. In fact the 400 Million spores in each capsule, is far more than the amount required in most studies to show clinical effectiveness.

Usually when one buys a probiotic supplement, they are consuming a mixture essentially put together by a committee (scientists, researchers, marketers), and those work well for some people. But we all have a unique mix of probiotic bacteria in our digestive system and other people find that probiotic products actually disturb their digestive well being, giving them symptoms of gas, bloating, constipation, and/or loose stools.

A product like Lactospore, simply encourages the thriving of all the good bacteria that is already resident in your digestive system, and discourages the bad bacteria present from colonizing. This supports your unique microbiome, returning it to the healthful balance required for your body, not imposing other bacteria in ratios that may not be ideal for your system.

Why Use Lactospore Supreme?

While original Lactospore is sufficient for most of us, those with a severely disrupted microbiome may need a stronger version. This is why we created Lactospore Supreme, a product five times stronger than the original. Original Lactospore contains 400 million spores per capsule, which is twice the amount most clinical studies are based on.

New Lactospore Supreme contains 2 billion spores, and at a dose of one capsule per day, it has proven clinically effective at treating IBS, and lowering cholesterol levels. This would also be the ideal formula for those suffering from Crohn’s disease, colitis, severe candida overgrowth, and SIBO (small intestine bacterial overgrowth). Studies have also indicated its potential for treating mood disorders.

Another distinction between Lactospore original and Lactospore Supreme is the carrying agent. Our original product uses the soluble fiber, inulin, which serves as a prebiotic. However, the Supreme formula has replaced inulin with partially hydrolyzed guar gum, a substance more suited to those with, IBS, SIBO, or who are on a low FODMAP diet.

Fermented foods rich in probiotics (friendly bacteria) have a long history of human use, and such foods are still consumed throughout most of the world to this day. Our modern interest in probiotics is attributed to Metchnikoff’s theory of longevity, which associated the extremely good health and longevity of Balkan peasants with the use of fermented milks in their diet (kefir, yogurt). Metchnikoff, a Russian physician, theorized that the growth of toxin-producing putrefactive organisms in the gastrointestinal tract could be controlled by the consumption of beneficial bacteria from fermented foods, which would implant, and, with the help of lactic acid, colonize in the gut (Metchnikoff, E; 1910).

Colonization of the gut with microflora begins in the infant, shortly after birth. The ecology of the human gastrointestinal tract (now referred to as the microbiome) is a complex one, generally involving two kinds of flora: 1. Indigenous beneficial bacteria which have achieved a symbiotic relationship with the host through a long period of evolution. 2. Potentially pathogenic bacteria.

An optimal “balance” in this microbial population is associated with good health in humans, and is necessary for efficient digestion and maximum absorption of nutrients, for the production of certain nutrients, including B vitamins and vitamin K2, and as well, for a healthy immune system. (Shahani, KM et al, 1980; Gorbach, SL, 1990 Mitsuoka, T; 1988)

In modern times our beneficial microflora are most often compromised by antibiotic therapy. Antibiotics while being used to kill bad bacteria have the side effect of also destroying good bacteria, setting up a scenario where the bad bacteria that remain can overwhelm the remaining good bacteria. This imbalance leads to a various problems, ranging from inefficient digestion, diarrhea, constipation, and flatulence, to severe gastro-intestinal disorders, and overgrowth of candida yeast; unless we compensate, by taking probiotic supplements following antibiotic therapy.

The microbiome can also be disrupted by a poor diet high in sugar and low in fiber, and lacking in fermented foods. Due to modern living, the composition of our intestinal microflora is constantly changing, being influenced by factors such as emotional stress, age, travel to foreign countries, and treatment with medications that can also affect bowel function.

Probiotics in the gut have three major digestive functions, and usually, when we are lacking in good bacteria, digestive disorders are the first symptoms. These three functions are: proteolysis (the breaking down of protein from food), lipolysis(the breaking down of fat from food), and the conversion of lactose (milk sugar) into lactic acid. These digestive functions of probiotics are especially helpful in infant, geriatric and convalescent nutrition, and for those who suffer from lactose intolerance.

Many scientists now believe that the human microbiome has a role in the expression or inhibition of a number of illnesses, including allergies, auto-immune conditions, diabetes, eczema, IBS, fibromyalgia, hypertension, liver malfunction, multiple sclerosis, muscular dystrophy, obesity, rheumatism, and some cancers. (Round, J. L., et al (2009). “The gut microbiota shapes intestinal immune responses during health and disease”. Nature Reviews: Immunology, 9 (5): 313–323)

Now that it has also been discovered that some of these microbes can modify the production neurotransmitters, probiotic therapy is being tested to treat neuro-chemical imbalances, such as anxiety, bipolar disorder, depression, and schizophrenia. (Bravo, Javier A., et al. “Ingestion of Lactobacillus strain regulates emotional behavior and central GABA receptor expression in a mouse via the vagus nerve.” Proceedings of the National Academy of Sciences 108.38 (2011)

Take on an empty stomach

Take on an empty stomach

At a certain point in the marketing of probiotics, the only way to distinguish a product became claiming a higher bacteria count than your competition. Products began with millions of bacteria, and now products are claiming up to 100 billion active bacteria. What is not commonly known, is that the higher the number, the weaker the bacteria, and the more susceptible they are to destruction by stomach acid, it then becoming necessary that the product be enteric-coated. Companies that market their products based on enteric-coating, claim that all probiotics should be enteric-coated or they are worthless, but it is only weak bacteria that require such protection.

When we consume fermented foods, the probiotics that they contain have to make it through the stomach acid intact, in order to implant in the intestines: and that has never been a problem. When naturally fermented probiotics are in their original medium, bacteria are bound together in chains, and as a result are strong and resistant to stomach acid. In order to get a higher bacteria count, for marketing purposes, the modern probiotic product is separated from its growth medium, and then centrifuged apart. This creates a larger number of bacteria, but of a weaker nature. At this point, products need both enteric coating, and a high number of bacteria, just to ensure any benefit at all.

Why is Inulin Added?

Prebiotics are food materials such as non-digestible oligosaccharides found in plant foods and whole grains that nourish the beneficial bacteria. Inulin (found naturally in chicory and Jerusalem artichoke), and fructooligosaccharides (FOS), are commonly added to probiotic dietary supplements to serve as prebiotics.

Irritable Bowel Syndrome: This randomized, double-blind, placebo-controlled clinical study involved 44 subjects with IBS, who received either placebo or B. coagulans (L. sporogenes), once a day for 8 weeks. “Preliminary data suggest that the patented B. coagulans probiotic may be a safe and effective option for the relief of abdominal pain and bloating for patients with IBS.” (Hun, L., 2009. “Bacillus coagulans significantly improved abdominal pain and bloating in patients with IBS”. Postgraduate Medicine 121 (2): 119–124)

Immune System Support: A controlled study was conducted to evaluate the effects of the probiotic Bacillus coagulans (L. sporogenes) on the immune system when exposed to adenovirus and influenza in healthy adults. “The use of B. coagulans significantly increased T-cell production of TNF-alpha in response to adenovirus exposure and influenza A exposure, but it did not have a significant effect on the response to other strains of influenza.” (Baron, M., 2009. “A patented strain of Bacillus coagulans increased immune response to viral challenge”. Postgraduate Medicine 121 (2): 114–118)

Digestive Disorders: It has been reported that “the efficacy of treatment in patients with bacterial dysbiosis receiving L sporogenes was 20-30 percent higher than traditional probiotics such as Lactobacillus acidophilus or Bifidobacteria.” (Voichishina LG, et al. The use of sporulating bacteria in treating patients with dysbacteriosis. Vrach Delo 1991;12:73-75)

“Seventy percent of individuals suffering from chronic constipation treated with 300-750 million spores per day of L. sporogenes for two to 10 days experienced an amelioration of abdominal distention and a normalization of stools. Reports suggest a benefit in neonatal diarrhea.” (Dhongade RK, Anjaneyulu R. Maharashtra Medical J 1977;23:473-474)

“Clinical efficacy of L. sporogenes has been shown in the management of gastrointestinal problems associated with infections or the use of antibiotics. Conditions include diarrheal diseases and constipation, as studied in populations of all ages, including infants and children. (Abstracts, 1968; Chandra, RK et al, 2002; Dhongade, RK et al, 1977; La Rosa, M. et al.; 2003)