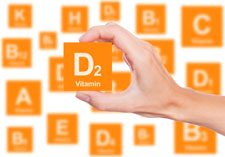 The Difference Between Vitamin D2 and D3

As a supplement, vitamin D is available in two forms: ergocalciferol (vitamin D2), made from ultraviolet irradiation of ergosterol (a form of yeast) derived from the mold ergot; and cholecalciferol (vitamin D3), made from lanolin irradiated with ultraviolet light. While vitamin D3 is the same as the form of vitamin D produced in the body following exposure to sunshine, the same does not hold true for vitamin D2.

The scientific community has generally regarded these two forms as equivalent, but that idea is based on studies designed to prevent rickets in infants, done around 70 years ago. These days, new studies are proving that D2 is an inferior form of vitamin D, and that D3 is the most efficient form of vitamin D to use for maintaining good health.

Unfortunately, the form of vitamin D used in prescriptions (in North America) is almost always for the inferior vitamin D2. Vitamin D2 was first produced in the 1920’s, when the process was then patented, and since has been licensed to drug companies for use in prescription vitamins. Therefore, if your doctor gives you a prescription for vitamin D, the only legal way (in Canada) to get more than 1,000 IU in a serving, you may wish to consider just buying D3, rather than filling the prescription. Especially after reading what follows.

The definitive argument against vitamin D2 comes from within the medical community, and was a systemic overview of vitamin D studies, published by the American Society for Clinical Nutrition in 2006. (The case against ergocalciferol (vitamin D2) as a vitamin supplement1,2 ; Lisa A Houghton and Reinhold Vieth)

The researchers maintain that once the more modern approach of testing the blood for 25-hydroxyvitamin D, as a measure of vitamin D status, became the standard, we then had an objective way to measure the biological response to different forms of vitamin D. To quote:

“As a result, vitamin D3 has proven to be the more potent form of vitamin D in all primate species, including humans. The case that vitamin D2 should no longer be considered equivalent to vitamin D3 is based on differences in their efficacy at raising serum 25-hydroxyvitamin D, diminished binding of vitamin D2 metabolites to vitamin D binding protein in plasma, and a nonphysiologic metabolism and shorter shelf life of vitamin D2. Vitamin D2, or ergocalciferol, should not be regarded as a nutrient suitable for supplementation or fortification.”

Some of the facts found in this study include:

-The metabolites of vitamin D2 bind with protein poorly, making it less effectively absorbed than D3.

-Once either form of the vitamin D is in your body, it needs to be converted to a more active form, in order for the body to utilize it. Vitamin D3 is converted 5 times faster than vitamin D2

-No clinical trials have ever demonstrated conclusively that vitamin D2 prevents fractures, while clinical trial of vitamin D3 have shown that it does.

-“In addition to its lower bioactivity, the poor stability of vitamin D2 is worrisome, particularly upon exposure of crystalline D2 powder to varying temperatures, humidity, or even storage containers.”

-“The poorer stability of and greater impurities in vitamin D2 powders may also lead to a higher risk of toxicity than that associated with the vitamin D3 metabolites.”

If poor bioavailability and potential toxicity are not enough to scare you off of vitamin D2, consider also that double blind, placebo controlled studies have found that taking D2 actually lowers blood levels of D3. (Study)

One study compared vitamin D2 with D3 (and a placebo) over an 8 week period, during the winter of 2012 in Germany. In the group receiving vitamin D2 their blood markers for D2 concentrations increased significantly, but surprisingly the blood markers for D3 concentration fell dramatically. Their conclusion was that: “Vitamin D3 increases the total 25(OH)D concentration more than vitamin D2. Vitamin D2 supplementation was associated with a decrease in 25(OH)D3, which can explain the different effect on total 25(OH)D.”

So, vitamin D2 is less well absorbed and utilized by the body, and it also interferes with, and actually reduces, levels of circulating D3 in the body. This conclusion is confirmed again by a very recent study released in February of 2014. But this study added one further bit of bad news when it was revealed that vitamin D2 was also linked to causing muscle damage after intense exercise.

NASCAR pit crew athletes were randomly assigned to take either vitamin D2 or a placebo for 6 weeks. Participants engaged in 90 minute eccentric exercise, with blood samples and delayed onset of muscle soreness ratings obtained immediately after, and 1 and 2 days after exercise.

While researchers believed taking vitamin D2 would improve performance by reducing inflammation, and aiding in recovery from exercise-induced muscle damage, the results were disappointing.

“This is the first time research has shown that vitamin D2 supplementation is associated with higher muscle damage after intense weightlifting, and thus cannot be recommended for athletes,” David Nieman, DrPH, director of the Human Performance Lab at Appalachian State University, stated. “While vitamin D2 levels in the blood increased, we found that levels of the valuable D3 decreased. And to our surprise, those taking vitamin D2 didn’t have just a little more muscle damage, they had a lot more damage.”

Vegans are opposed to taking vitamin D3 since it is most often derived from either fish liver oil, or from lanolin, which, even though the sheep are not killed for their wool, is still unacceptable to the vegan ethos. So, generally, vegans have only one choice: vitamin D2, commonly sourced from mushrooms. Mushrooms are moderately high in vitamin D but that amount can be increased by subjecting them to extra ultraviolet light. Still, this vitamin D is in the form of D2. And as this study below illustrates, even this natural form of D2, while it did not cause the muscle damage that the last study discussed did, it still reduced blood levels of D3 and offered no benefits.

The purpose of this study was to determine if supplementation with vitamin D2 would enhance skeletal muscle function and reduce exercise-induced muscle damage, in high school athletes, who already had low vitamin D levels. Participants were randomly given either Portobello mushroom powder (600 IU vitamin D2) or placebo for 6 weeks.

There is some good news for the vegans, though. A British company has patented a new form of vitamin D3 that is derived from lichen, and it is now available in North America. Called “Vitashine” it is the first vitamin D3 that has been extracted exclusively from a plant source, and is fully endorsed by The Vegan Society (United Kingdom).

There was a valid reason for those who ran the last two studies that we looked at, to believe that vitamin D2 would help control inflammation and reduce muscle damage following exercise. That is because other studies have already shown that vitamin D3 supplementation, and/or naturally high blood levels of vitamin D3, will prevent exercise induced muscle damage, and control ensuing inflammation.

So, the fact that vitamin D2 cannot accomplish what D3 clearly can do, and the fact that D2 lowers levels of circulating D3, I think should be enough to convince anyone that D2 is best avoided, both as a supplement and in fortified foods. When looking to get vitamin D from fortified foods, be sure to read the labels, since some dairy products, and other food products, are still fortified with the inferior vitamin D2.