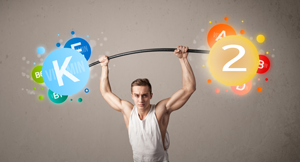 Vitamin K is an essential nutrient that everyone needs for a healthy body and is well known for its role in effective blood clotting.  Vitamin K is also an important nutrient for a number of very important health issues.

We All Need A Vitamin K2 Supplement

Though I have written a couple of Vitamin K blog posts on the subject, I will briefly re-emphasize the most important reasons why we all should be taking a vitamin K2 supplement. And the first reason is because the odds are that we are all deficient in it.

We now know that the type of vitamin K that is most utilized by the body is the K2 form, found mostly in butter, cheese, eggs yolks and meat products, from animals fed on grass. In North America most food animals are fed grains (because it is cheaper), so deficiency of vitamin K2 has become widespread.

NutriStart is proud to announce the release of the newest addition to our line – Vitamin K2 (MK7), in a highly absorbable liquid form. (Quick K)

The Top 6 Benefits of Vitamin K2

It is well established that vitamin K2 develops bones during growth by directing calcium where to go in the skeleton, and in the cells. Vitamin K2 is not only necessary for growing bones but will rebuild and maintain bones in adults as well, and is one of the most important nutrients required to prevent osteoporosis. Since the teeth are part of the skeletal system, and since some of the highest stores of vitamin K2 are found in the salivary glands in the mouth, it is clear that K2 is necessary for healthy teeth as well as bones.

2. Protects Against Hardening of The Arteries and Stroke

In a “Study of Osteoporotic Fractures” it was shown that bone density is a good general predictor of early mortality. What was discovered was that most of the women with osteoporosis didn’t die from complications from broken bones or the resulting surgery. The majority of deaths actually occurred mostly from cancer, heart attack and stroke. Science now suspects that osteoporosis is a warning sign that calcium has built up in the arteries, instead of remaining in the bones, where it belongs.

When we have enough vitamin K2 in our bodies, it will direct calcium to the bones and teeth, and keep it away from the areas where it could do harm, such as the cardiovascular system and soft tissues.

A European study of more than 8,000 people over the age of 55 found that those with the highest intake of vitamin K2 had a 50% reduction in death by coronary heart disease. Furthermore, studies done on animals have indicated that calcification of the arteries can even be reversed with supplemental vitamin K2, and it has also been shown that diets high in vitamin K prevent the thickening of arteries in rats prone to stroke.

Reference: Dietary intake of menaquinone is associated with a reduced risk of coronary heart disease: the Rotterdam Study

The fact that some of the highest levels of vitamin K are stored in the pancreas, has lead to the idea that it may also be a necessary part of controlling blood sugar levels. Japanese scientists did study the link between vitamin K and insulin function in the body and, while it was an animal study, what occurred with vitamin K deficiency mimicked what occurs with diabetics. As well, a small scale human study concluded: “To summarize, we have demonstrated for the first time that vitamin K2 supplementation for 4 weeks increased insulin sensitivity in healthy young men.”    (Reference)

A number of studies have linked vitamin K2 deficiency to increased cancer risk. One study involved over 24,000 participants, who were tracked for an average of 10 years. What was found was that vitamin K2, but not vitamin K1, was inversely associated with the risk of getting cancer and dying from it, especially showing a dramatic reduction in both lung and prostate cancer. People who have higher intakes of vitamin K also have a 45% lower risk of developing Non-Hodgkin lymphoma.

It is known that dialysis patients are more prone to bone fractures than most people, and have higher than normal levels of a compound called “apolipoprotein E” in their blood. They are also prone to poor vitamin K status. Elevated levels of this apoE compound have been directly linked to Alzheimer’s disease. The combination of low vitamin K and high apoE affects the body’s ability to regulate calcium levels in the brain. And, indeed, studies have found that patients with Alzheimer’s disease have unhealthy calcium levels in their brains.      Reference

New recommendations for supplementing with vitamin D are all over the map, depending on who you listen to. While we certainly need more than 1,000 IU daily (currently recommended by most doctors), it is possible to take too much vitamin D. When the levels of circulating D3 get too high, and they mobilize too much calcium into the bloodstream, we are in danger of developing hypercalcemia. If we don’t have enough vitamin K2 in our blood, to guide this extra calcium to where it belongs, in bones and teeth, we then face the danger that some of this calcium will deposit in inappropriate places. This can be in the joints, leading to arthritic conditions, or worse, the arteries, leading to calcification of the arteries. Therefore, anyone taking any more than 4 or 5000 IU of vitamin D3 daily, should definitely add a vitamin K2 supplement to their regimen.      Reference

For more information on Vitamin K see our blog posts:

The Importance of Vitamin K2