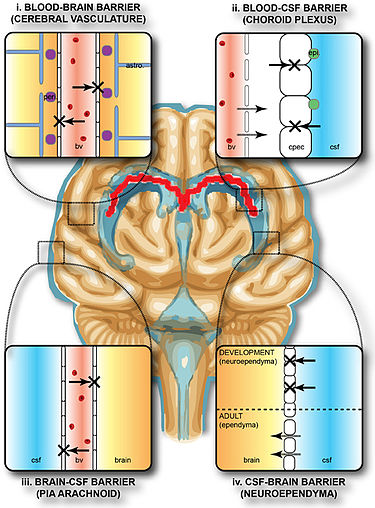 The blood-brain barrier (BBB) is a membrane which prevents toxic materials in the blood from entering the brain, but certain compounds (both good and bad) are able to get through this barrier.

In this blog, I will look into those things that can bring antifungal agents directly into the brain in order to kill fungus, and bad microbes, which can lead to brain malfunction and Alzheimer’s disease. I have extensively covered coconut and MCT oils in my blogs on The Real Cause of Alzheimer’s Disease, so here I will examine other agents with similar properties (antifungal and able to cross the blood-brain barrier).

Antifungal Agents That Cross the BBB

The antifungal effects of certain black seed constituents were compared with those of preservatives commonly used in milk products (calcium propionate, natamycin, and potassium sorbate), and were shown to possess significant anti-yeast activity. (Study)

But, even better, one study gave black seed, or clove, oil to rats fed an aflatoxin-contaminated diet, which “resulted in significant protection against aflatoxicosis. Moreover, Nigella sativa oil (black seed) was found to be more effective than Syzygium aromaticum (clove) oil in restoring the parameters that were altered by aflatoxin in rats”.   (Study)

Thymoquinone (TQ), the main bioactive component of black seed has exhibited anticancer effects in numerous clinical studies. It has been shown to “interfere in a wide range of tumorigenic processes, and counteract carcinogenesis, malignant growth, invasion, migration, and angiogenesis.”

But here is where it gets really interesting: “Its potential to enter brain via nasal pathway due to the volatile nature of TQ adds another advantage in overcoming blood-brain barrier.”

Thus the researchers “suggest further comprehensive evaluation of TQ in preclinical and clinical level to delineate its implied utility as novel therapeutics to combat the challenges for the treatment of Glioblastoma multiforme” (one of the deadliest types of brain tumors).  (Study)

But, even if we can now easily digest the turmeric (as an extract, or rendered into a fat medium), once metabolized in the liver, free curcumin becomes “conjugated”. This prevents it from being absorbed effectively into the tissues, or from crossing the BBB. If, however, curcumin can remain in its free form, it is both biologically active, and able to move throughout the body, being easily absorbed from the blood, and, free curcumin is also able to cross the blood brain barrier.  (Study)

Countless clinical studies have confirmed the ability of curcumin, and turmeric extracts, to destroy a wide variety of different bacteria, viruses, fungi, and parasites. As well, much research has been done by the food industry in order to study the effects of turmeric and curcumin on controlling fungal-related spoilage, and fungal pathogens.

The study of curcumin against 14 strains of candida showed curcumin to be a potent fungicide compound against candida species. In another study, anti-candida activity of curcumin was demonstrated against 38 different strains of candida, including some fluconazole-resistant strains. (Candida initially is defined as a yeast, but when it grows out of control, it converts into being a fungus, and is at that point pathogenic.)   (Study)

Recent research on Alzheimer’s disease (AD) and curcumin has revealed that curcumin prevents amyloid plaque aggregation, if it can reach the brain and protect neurons from damage.

According to a study (2018) titled, “Liposome delivery systems for the treatment of Alzheimer’s disease”: Targeted nanoliposomes represent a viable and promising drug delivery system for AD that have not yet reached clinical trials. They are biocompatible, highly flexible, and have the potential to carry many different types of therapeutic molecules across the blood-brain barrier (BBB) and into brain cells.   (Study)

Thus, a liposomal form of curcumin will be of great advantage in getting this antifungal agent into the brain where it can do its work directly.

Zeolite is a naturally occurring mineral rock, often powdered and consumed in water for detoxification purposes. This approach is medically approved, based on the physical properties of zeolite, which has cavities in its natural crystal lattice structure that act like a filter, binding pollutants (such as aluminium, ammonium, cadmium, lead, and mercury).

For an optimal effect, the surface of the zeolite is enlarged by micronization, thus the effect of zeolite depends, among other things, on the size of the granules. The finer the powder, the lower the dose, and the coarser the zeolite, the higher the dosage required. (Source) So, given that, could nano-sized particles of zeolite absorb even more harmful compounds, and perhaps even make it across the blood brain barrier?

That is the argument put forth by Coseva, who markets Advanced TRS (Toxin Removal System) spray. This is what they say about their product: “TRS removes any toxin with a positive charge and that includes heavy metals and toxic elements – aluminium, mercury, arsenic, fluoride, barium, strontium, uranium, lead, etc, pesticides and herbicides, plastic residues, toxins from moulds and yeasts, carcinogens from smoke and haze and also any radioactive material in the body.”

“With the nano zeolites encased in water, a good way to think about it would be hundreds of thousands of little toxin magnets encased in water molecule clusters going into your body. These toxin magnets are attracted to heavy metals, pesticides and any other toxin that has a positive charge. Their tiny size (0.9 nanometers) means that they have a huge amount of surface area to capture toxins and the encapsulation in water molecule clusters means that they can go wherever water goes and cross the blood brain barrier easily and detox the body at a cellular level.”

“Once toxins get stuck in the magnets they are captured within the zeolites cage-like structure and are rendered inert and have no chance of breaking loose. This is why TRS does not cause redistribution and damage to the body. TRS is transported out of the body mainly through the urine and other usual elimination pathways. As the nano zeolites are so tiny, the kidneys don’t have to filter them, that’s how gentle this method of detoxing is.”

TRS can be purchased at this site. Though it appears that there is little independent science on the use of nano-sized zeolite particles for the purposes of detoxifying the brain, there is a lot of anecdotal feedback (especially for treating autism). Follow this link for a detailed example from a woman coping with metal toxicity and her ensuing health issues.

A similar product (unlike TRS, available through Amazon) is Advanced Cellular Zeolite. They claim that, “prescribed by leading medical practitioners worldwide, ACZ nano Extra Strength has been shown to increase urinary output of Lead and Mercury up to 103,500% over baseline during only 12 hours of post-provocation urine collection”. (Here is the link to their product.)

The fragrant essential oils, used in aromatherapy, are claimed to have direct access to the brain. The principle is that, since the brain is mostly made of fat, and essential oils are fat soluble, they can pass through the BBB. While many fat soluble nutrients never make it through the barrier, what makes essential oil fragrances effective at doing this is the extraordinarily small molecules which make up their volatile compounds.

This ability to cross the blood brain barrier is attributed to the chemistry of the oils, specifically, those that are classified as “terpenes”, a family of molecules small enough to penetrate the blood-brain barrier.

All essential oils contain some terpenes. In part two of this series, I mention a variety of herbs and spices with antifungal activity. Those of this grouping would contain terpenes ideal for destroying molds and fungi in the brain, and are essentially ingested when we can smell them at a high intensity of fragrance. Thus they can be rubbed under the nose, put in an aromatherapy diffuser or, for most therapeutic benefit, nebulized or put into a bowl of hot water and inhaled (as we would do with eucalyptus to treat a head cold or lung congestion).

Of those substances mentioned in part two, these are the plants which are available in the form of essential oils: clove, frankincense, ginger, marjoram, myrrh, oregano, rosemary, and thyme.

And, strange as it seems, an alcohol extract of pine, turpentine, is now (as it was in the past) being ingested by some as a treatment for candida, fungus, and SIBO (small intestine bacterial overgrowth). Since turpentine is high in terpenes, and has proven antifungal properties, it would also be a viable option for inhalation.

This website sells a variety of essential oil mixes, high in terpenes, and aimed at getting through the BBB.

My next blog will be on the blood brain barrier, what causes it to thin, and what we can do to rebuild and strengthen it.

« Molds and Fungi: Part 3 – Detoxing the Body, and Purifying the Air
Maintaining The Blood-Brain Barrier »