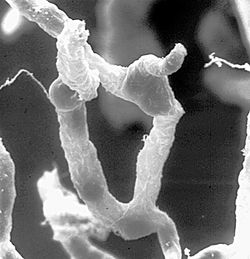 The blood-brain barrier (BBB) is a membrane which prevents toxic materials in the blood from entering the brain. In my last blog, I examined substances that can cross the blood brain barrier, and how we can use these compounds to kill off damaging bacteria, molds, and fungi that may inhabit our brains, leading to a wide range of ailments.

The patient originally had a stroke, and was given a CT scan, after which they diagnosed her with a brain tumor. However, once undergoing surgery it became apparent she did not have a brain tumor, and that, by this time, the amoeba had eroded away large portions of her brain. In spite of removing the portions damaged by the amoeba, the patient died within a month.

My point here is that her BBB must have thinned in order for this amoeba to get from her sinuses into her brain. (And most likely her sinuses were also thinned. For those unfamiliar with my blog How 3 Nutrients Can Heal Most Ailments I would suggest having a read, since it concerns keeping the mucous membrane intact, including that which lines the sinuses.)

You may recall the news story about a woman from Seattle whose brain was being eaten away by a rare brain infection called Balamuthia mandrillaris (an amoeba found in soil and freshwater, which generally causes no harm to humans). The surgeon who worked on her believed it was the use of a neti pot (a device used to relieve sinuses by shooting water up the nasal cavity) that put the amoeba into her brain. (She used tap water, as opposed to the suggested boiled water, or salt water solution.)

Thinning of the BBB

In a study published in 1975, in the Annals of the New York Academy of Sciences, biologist Allan H. Frey reported that microwaves (cell phones), and Radio Frequency radiation (smart meters, wi-fi, routers, etc), could induce “leakage” in the barrier between our circulatory system and our brain.

Frey showed this process with a simple experiment. “He injected a fluorescent dye into the circulatory system of white rats, then swept the microwave frequencies across their bodies. In a matter of minutes, the dye had leached into the confines of the rats’ brains.”   (Source)

Allan Frey’s work has since been confirmed by many other researchers, including Dr. Leif Salford, who is currently the most active researcher continuing Frey’s work on the blood-brain barrier. (For a short video on this research, presented by Dr. Salford, follow this link.)

When the BBB is breached, bacteria, toxins, and viruses can enter the brain. This breaching of the BBB also is a factor in brain conditions ranging from autism to schizophrenia, as the offensive proteins found in casein and/or gluten, can easily get into the brain, causing havoc.

Glyphosate (Roundup™ ) is the most used pesticide in the world, found at especially high levels in genetically modified foods. This pesticide is still legal in most countries, even though it is ubiquitous in people’s urine, breast milk, and blood (even among those avoiding GMOs), and is, in the words of an MIT scientist, “the most destructive chemical in our environment”. (For more on the subject follow this link.)

Because glyphosate targets a metabolic pathway absent in animals, it was considered safe for humans. Yet, because it is made with the amino acid glycine, researchers began to suspect that it could easily follow the glycine pathway in humans, which would allow it to cross the blood-brain barrier, and interfere with brain chemistry.

One research group, having observed that “case reports of accidental exposure to concentrated solutions suggested a neurotoxicity” decided to investigate “the effect of acute exposure to glyphosate (GPH) on the blood-brain barrier in vitro”.

Their study concluded that, “in addition to its ability to disrupt the barrier function, GPH shows evidence of permeability across the BBB. Taken together, our data indicates that accidental exposure to high levels of GPH may result in neurological damage via an opening of the blood-brain barrier and an alteration of glucose metabolism”.   (Study)

Now, it is all well and good to suggest that exposure to high levels of GPH may result in neurological damage, and open up the blood-brain barrier, but what about the average person? Well, we now all have glyphosate in our bodies, and how much we carry is mostly determined by our diet, but the highest exposure to glyphosate comes from genetically modified foods. As of 2015, 26 plant species have been genetically modified and approved for commercial release in at least one country, though the most commonly consumed ones are soy, corn, and canola.

High exposure also comes from eating certain foods which, while not genetically modified, have had glyphosate sprayed on them as a desiccant. “Few statistics exist regarding the acreage subject to glyphosate desiccation or the overall quantity of glyphosate use for drying, but there’s little doubt that the practice is expanding across a variety of crops including corn, peas, soybeans, flax, rye, lentils, triticale, buckwheat, canola, millet, and wheat.”  (Source)

So, obviously, those who eat the most of these foods may have much higher levels than those who avoid these foods. However, if we are already prone to a thinning of the blood-brain barrier, due to genetic conditions, or disease states, or even because we are lacking the nutrients that keep our mucosal membranes intact (again see, How 3 Nutrients Can Heal Most Ailments), glyphosate is going to worsen the problem, whether or not we are exposed to high levels. And, pesticides like this are cumulative, so the more, and the longer, we ingest them, the higher our levels become.

The Townsend Letter, an alternative medicine journal, offers some suggestions for detoxifying glyphosate.

For more on the subject of detoxifying glyphosate follow this link to the Townsend Letter.

According to Dr. Dietrich Klinghardt, world-renowned expert on mercury detoxification, in order to eliminate glyphosate, one needs to saturate the body with the amino acid glycine (since glycine is a component in the structure of glyphosate). He recommends taking 1 teaspoon (4 grams) of glycine powder twice a day, for a few weeks, and then lowering the dose to one-fourth teaspoon (1 gram) twice a day. (Glycine is also available in 1 gram capsules.)      (Source)

Manganese (Mn) is an often overlooked trace mineral required for multiple essential functions in the body. “A recent study on cows fed genetically modified Roundup®-Ready feed revealed a severe depletion of manganese. Glyphosate, the active ingredient in Roundup®, has also been shown to severely deplete Mn levels in plants.”    (Study)

Thus, it makes sense for all of us to ensure we get some manganese in our supplements, especially since we are all unavoidably ingesting some glyphosate. We at NutriStart provide manganese at 5 mg per serving (the recommended amount to prevent deficiency) in two of our products, NutriPods, and Mineral Mix.

Obviously it is of paramount importance that we maintain the integrity of the BBB, so now I will look at some ways of accomplishing that.

But, the really interesting thing was that “supplementation also improved gut and blood brain barrier integrity”.  (Study)  The only problem here is I cannot say for sure that other strains of L. plantarum would do the same thing. Even though L. plantarum is commonly available as a supplement, most products do not list the specific strain they are derived from. I suspect all versions of L. plantarum would be helpful, but I cannot be 100% sure of this.

At the very least, we have a study titled, “The gut microbiota influences blood-brain barrier permeability in mice”, in which “results suggest that gut microbiota-BBB communication is initiated during gestation and propagated throughout life”.  (Study)

Thus, ensuring we have a healthy microbiome is a main factor in ensuring the integrity of the BBB. As always, I suggest the use of Lactospore, prebiotic fibers, and fermented foods, over random mixes of probiotic bacteria, in order that one rebuilds their microbiome to the ideal mix of bacteria for their own unique system.

So, of course, taking glutathione in a liposomal form would be one of the ideal ways to improve BBB integrity.

Both cognitive enhancement, and recovery from brain damage, rely on neurogenesis, the process which rebuilds and reshapes the brain.

In one animal study, sodium butyrate was given to mice after they had a stroke, and it worked to grow new nerve cells (neurogenesis) in the areas of the brain damaged by the stroke. But, more than that, sodium butyrate also strengthened the blood-brain barrier in mice with brain trauma, which aided in their recovery.    (Study)

Butyrate-producing bacteria in the gut also strengthened the blood-brain barrier in mice, along with strengthening the barrier formed by cells in the colon wall, thus preventing microbes and bacterial toxins from invading the bloodstream (“leaky gut”).

And, according to one study, certain prebiotics “such as inulin-type fructans (ITF) and arabinoxylan-oligosaccharides (AXOS) can be consumed to increase the number of bifidobacteria in the colon…It has been shown that the butyrogenic effects of ITF and AXOS are the result of cross-feeding interactions between bifidobacteria and butyrate-producing colon bacteria”.

So, to increase butyrate naturally, we can ingest inulin, and/or bifidobacteria (available as a probiotic supplement). As for AXOS, this appears to be mostly found in whole cereal grains, especially high in wheat bran (ensure that it is organic).

Sodium butyrate can also be purchased as a supplement (most commonly sold for supporting the Ketogenic diet). (For more on the subject of sodium butyrate see my newsletter, Butter-up Your Social Life.)

A thinning of the BBB has been linked to many ailments including Alzheimer’s disease, amyotrophic lateral sclerosis (ALS), bacterial meningitis, cognitive impairment, multiple sclerosis, and neuropathic pain. (Source)

As well, behavioral problems, and learning disabilities can be caused by this barrier being too thin in infants and children, and now autism is considered to be, in part, due to the same issue (accompanied by leaky gut syndrome).

Strong links have been established between BBB malfunction and bipolar and schizophrenic conditions, as well as dementia in the elderly.

So, clearly it behooves us all to give consideration to this important part of our brain, and realize that due to both nutritional deficiencies, and environmental toxins, we all need to ensure that this barrier stays intact.