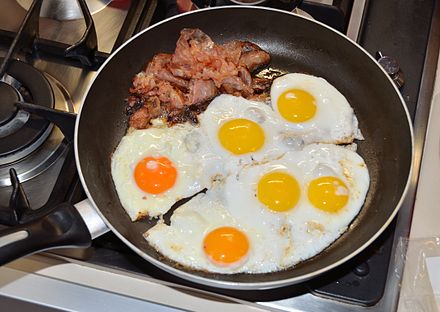 Oh, myth, myth, could I have some eggs over here please? Or should I? According to my doctor my cholesterol reading is high, and he wants me to cut down on my cholesterol intake, and take a statin drug, to force that cholesterol down.

The first myth here is that a high cholesterol reading is actually an indicator of potential heart disease. There was a time when the Inuit had so much cholesterol in their diet that they were off the world map, and yet had no appreciable incidences of heart disease. (In modern times, with the consumption of the standard western diet, they are no longer free of heart disease.)

This may have been due in part to the high amount of Omega 3 fatty acids (from seafood) found in their traditional diets, which keeps the blood flowing freely, but it clearly indicated that cholesterol alone was not the problem. The problem occurs when the cholesterol starts to build up on the arteries and there are more important benchmarks to check to see if this is likely to happen than total cholesterol readings.

What is actually indicative of danger is the ratio of “good” (HDL) cholesterol to “bad” (LDL) cholesterol, and the lipoprotein (a) and C-reactive protein readings. Having high levels of HDL cholesterol is a predicator of longevity as it appears to be linked to the ability of the body to detoxify itself. Lipoprotein (a) causes clots and is strongly linked to coronary heart disease, atherosclerosis, thrombosis and stroke. Currently available lipid reducing drugs have no effect on lipoprotein (a) though both niacin and aspirin will reduce it.

C-reactive protein is an indicator of inflammation found in the blood and is a far greater indicator of the potential for heart disease than cholesterol is. C-reactive protein is linked to hypertension as well as heart disease and is not lowered by the cholesterol medications. But can be reduced with simple vitamin C, a diet high in fiber based on fresh fruits and vegetables, dark chocolate, and fish and fish oils (especially Krill Oil).

The second myth is that we want to keep our dietary cholesterol low. Since only about 30% of cholesterol comes from our diet, with the rest being produced by the liver, restricting cholesterol in the diet can be only of limited benefit. Very often when the cholesterol is seriously too high it is the liver malfunctioning and producing too much. (And remember there are people who just have genetically high cholesterol and in the past every time” they” came up with a new cholesterol lowering medication they would simply adjust the bar downwards, so that more people fell into the potential customer range.)

Artichoke extracts are what are used in Europe to naturally treat overproduction of cholesterol by the liver. From a dietary point of view two of the most powerful foods shown to lower unnaturally high levels of cholesterol are soy foods, and fiber.

Now, if the HDL is too low or the LDL is too high there is a problem that should be addressed and there are many natural substances that can correct this imbalance safely. These substances can also be counted on to somewhat reduce total cholesterol. Options include Sytrinol, Niacin (either flushing or “intermediate release”), Krill Oil, and Policosinol.

The medical approach however is not safe, since the commonly prescribed “statin” drugs have dangerous side effects. The problem with these drugs is that they rob the body of the nutrient COQ10 which is required for, wait for it, keeping the heart beating regularly. Therefore, while they may prevent heart disease from the high cholesterol angle, they lead to it by a different avenue.

COQ10 is also required for energy production in the mitochondria, so one very common side effect is muscle weakness, that gets worse the longer one is on the drug. Now I can’t exercise to keep my cardiovascular system in shape because my physical energy has diminished too much.

We Are Not Rabbits

There are a few important things to know about cholesterol. First, the original studies that linked cholesterol in food to heart disease were flawed. They were based on injecting purified cholesterol into rabbits, and indeed their arteries became clogged. But rabbits are pure vegetarians; there would never be cholesterol in their diet in nature. We are omnivores and can digest and process animal proteins.

Ensuing studies that put people on severely cholesterol- restricted diets found that an appreciable amount of those subjects died prematurely, from causes other than heart disease. This was, in part, do to the fact that we need cholesterol to produce the sex hormones in the body, which are required for health and longevity.

What is the Main Cause of High Cholesterol?

The major cause of good cholesterol going bad is high stress. The body manufactures cholesterol to provide the adrenals with the building blocks for not only the sex hormones but also the “flight or fight” hormones including cortisol. When stress is continually high the body will overproduce cholesterol and when the other factors are in place (poor diet high in free radicals and lacking in antioxidants, low vitamin K2 stores, too much homo milk, etc) trouble is in the works. For this reason the approach to high cholesterol in Chinese medicine is to encourage meditation and rest and relaxation practices.

Homo Milk is Not Safe

Two little discussed causes of the build-up of cholesterol on the arterial walls are homogenized milk and vitamin K2 deficiency. There is a enzyme called xanthine oxidase (XO) found in milk fat, which is usually easily digested by the body. But when the process of homogenization is performed on milk this substance becomes dangerous.

Homogenization involves breaking the fat down in very small globules, evenly distributing the fat throughout the body of the milk, which is why you don’t see the cream float to the top like it used to in the good old days. Homogenization reduces the XO to such a small size that it can actually pass through the intestinal walls and into the bloodstream.

Here it causes little tiny lesions in the artery walls as it passes through, and the body tries to heal the damage by putting a little band-aid made of cholesterol over the tear. Over time this can build-up appreciably contributing to thickening of the arterial walls. In support of this scientific theory we find that heart disease rates are highest in the countries that consume the most homogenized milk.

The other problem with milk is that since we no longer grass feed cows and cattle, modern dairy and meat products are devoid of vitamin K2. (An interesting aside is that what is now trendy in professional sports is the consumption of grass fed beef, as it is believed to create a stronger physical specimen of athlete.) Vitamin K2 prevents osteoporosis by directing calcium to build bones but in its absence calcium will often be misdirected and will be allowed to build up in the arteries leading to both narrowing and hardening of the arteries.

Consuming non-homogenized dairy-products from grass-fed cows, especially butter, and grass fed meat can offer some protective vitamin K2, and it is currently available in supplement form as well. In supplement form vitamin K2 comes as MK4 and MK7, which is important to know because the MK4 version only works when it is in milligram doses whereas the MK7 version will be effective at microgram levels. In Canada K2 is only allowed for sale in microgram amounts so it is important to choose MK7 when purchasing such products in this country.

And we mustn’t forget free radicals damage which scars the arterial linings, again allowing cholesterol to be trapped and build up. So while a high cholesterol meal won’t necessarily be a problem, if it is deep fried in damaged vegetable oils and produces free radicals it will lead to heart disease through another mechanism. Thus maintaining a good intake of antioxidants from whole foods and supplements (especially the “ACES”) is critical to preventing heart disease, irrespective of cholesterol levels.

How to Cook an Egg 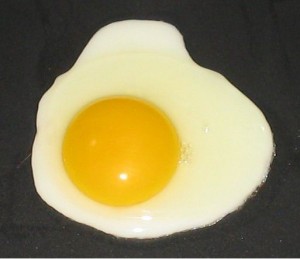 We opened with eggs so let’s close with them. A little known fact about eggs and good health: it makes a difference how you cook them. When we scramble eggs and oxidize the yolk (where the cholesterol is) under heat, the cholesterol becomes damaged and difficult for the body to process. However, when the egg is boiled, or poached and the cholesterol is not oxidized it will not adversely affect cholesterol levels in the body. This can be observed by the difference between cleaning a pan that has had eggs scrambled in it (hard and caked on)versus cleaning up after poached or boiled eggs (soft and pliable).

Products  from NutriStart that are helpful for balancing and controlling cholesterol include:

NutriPods: provides antioxidants and the B-vitamins that prevent homocysteine build-up

ImmuneStart: Astragalus,Cordycepts, Maitake and Reishi all are implicated in reducing cholesterol and supporting the cardiovascular system.

« Supplements That Protect Against Radiation
Updates on Vit A, Vit D, Calcium, and the PSA Test »