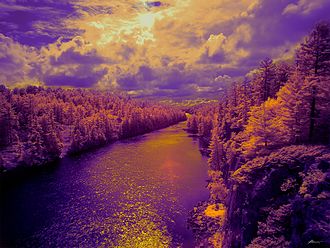 Chronic sleep problems are considered hazardous to health, as well as being linked to a number of disease states, which is all the more unfortunate since sleep disorders are now widespread.

Those who regularly experience insomnia are more prone to reduced immunity, increased incidence of infections, glucose intolerance, elevated estrogen levels, hormonal imbalance, and slow healing. And of course, there is also the obvious decreased alertness that follows in the morning, and the potential dangers that lack of concentration can have (such as accidents).

High stress on a continuous basis will affect sleep initially, and ultimately will affect adrenal function. Once the adrenals become fatigued, one will regularly wake up around 3 o’clock in the morning (give or take).

Waking at this time occurs because the healthy pattern of cortisol secretion by the adrenal glands becomes compromised. Cortisol is a “stress” hormone secreted by the adrenal glands. Normally, cortisol levels rise and fall in a predictable pattern throughout a 24 hour cycle. The levels are usually highest around 8 a.m., when we rise to meet the day, and lowest between midnight and 4 a.m.

Stress will cause a rise in the adrenal hormones adrenaline and cortisol, an approach designed to keep us alert), but high stress can crank those hormones up to the point of causing hyper-vigilance. So, obviously if these hormones are too high at night, we will have difficulty sleeping.

Normally, such high stress is a temporary situation, but for some high stress is continuous, either due to environmental circumstances (living situation, family, job, etc), or to PTSD, which leaves one unduly stressed by much of life.

Thus reducing stress, and increasing the body’s ability to cope with stress, will be of value in these circumstances, hopefully helping one to get the sleep train back on the right track.

Stress reduction techniques such as breathing and relaxation exercises, meditation, and yoga, can all help to lower cortisol and adrenaline levels, not only at night, but during the day as well. However, one should not exercise vigorously in the evening as that can increase cortisol levels, and agitate the system, making it difficult to relax at bedtime.

When we have exhausted adrenals, the ensuing low levels of the adrenal hormones can result in low blood sugar, another source of disrupted sleep patterns. This occurs because cortisol has a role to play in maintaining blood sugar levels.

Even though by the early morning blood sugar levels are usually low, if one has full blown adrenal fatigue, their cortisol levels may not be sufficient to adequately maintain their blood sugar levels. When the glucose in our blood gets too low danger alarms are initiated in the body. Since glucose is the main fuel for all of our cells, including the brain cells, the body realized it is in imminent danger when the blood sugar levels fall too low. Evolution has set this internal alarm to wake us up so that we can go refuel ourselves.

If at night we have low blood sugar levels, due to a lack of glycogen reserves in the liver (i.e. no available glucose reserves for the cells), compounded by a low level of cortisol (due to adrenal exhaustion), then the drop in blood glucose will lead to sleep disruption.

So, waking up regularly between 1 and 3 a.m. can be caused by low blood sugar as a result of low glycogen reserves in the liver, combined with low cortisol and impaired adrenal function. Other symptoms of this perfect storm are restless sleep during this time frame (tossing and turning, slipping in and out of sleep), anxiety attacks, and nightmares.

To ensure that the liver has adequate stores of glycogen to draw upon for regulating blood sugar levels, remember this: the most effective form of “carb loading” occurs after exercise. That is the time the liver (along with the muscles) is most adept at storing glycogen.

For some people, having a healthy snack shortly before bed can be of help. Such a snack should be light, and contain some protein, fat and carbohydrate. For example, peanut butter on whole grain toast, or cheese on whole grain crackers. Foods that contain too much sugar will be counterproductive since spiking insulin levels at night reduces growth hormone production, leading to faster aging.

Unlike those who have high cortisol levels, those with full on adrenal exhaustion, can benefit from some exercise before bed, since they could use elevated cortisol levels.

So, if we want to reverse this situation we clearly need to support adrenal function by rebuilding the health of our adrenal glands, and very often this can improve sleep patterns, though it is a long term solution, and one that may take a month or more to be effective.

(In the meantime have a read of this older blog on natural sleep aids.)

The irony is that lack of sleep itself can contribute to adrenal fatigue, ultimately setting up a downward spiraling cycle of further daytime exhaustion combined with an inability to sleep at night.

Since it takes days, or even weeks, to readjust the body’s cortisol levels when the sleep/wake cycle is disrupted, those who work on alternating shifts (with less than 3 weeks between shift changes) are particularly susceptible to adrenal fatigue, and sleep disorders.

While research has confirmed that most of us require about 8 hours a day of sleep, those recovering from adrenal fatigue may require more than that during the beginning phases of recovery.

If one suspects cortisol imbalance may be a cause of their sleep problems, it is advisable to do a saliva cortisol test. For this test, one collects four saliva samples, over a 24 hour period, which is used by medical professionals to establish the circadian rhythm of your adrenal glands, and how it relates to other hormones as well. This test is called the Adrenal Stress Index. Some conventional medical tests for cortisol use one or two blood samples, but that form of testing does not provide sufficient information for our purposes of determining the circadian rhythm of the adrenals.    (Source)

One of the other major hormone groups which relate to the adrenal glands are the thyroid hormones. If thyroid hormone levels drop below what the body requires, it is perceived as a stressor by the body, which then releases extra adrenal hormones.

The combination of inadequate thyroid hormones, along with cortisol imbalance, for a long period of time, will lead to adrenal shut down. At this point the adrenals can no longer produce adequate cortisol levels. This can lead to Addison’s disease “a long-term endocrine disorder in which the adrenal glands do not produce enough steroid hormones.”

At this tipping point, the adrenal glands often provide adrenaline as a substitute for cortisol, releasing the adrenaline at the same time that cortisol levels would normally peak. Those with this condition will wake up in a panic between 2 and 4 a.m.. They will also often feel panic when awake though it is not appropriate to the situation, say with the ringing of a phone. This is due to adrenaline being released inappropriately.

Causes of adrenal malfunction that lay outside of the obvious consistently high stress levels (or thyroid issues) can include nutritional status, food allergies, digestive disorders, and/or environmental toxins, all of which create stress on the body.

For mildly stressed adrenal glands, and for prevention of problems in those who are generally healthy, it is important to follow a healthy diet.

I believe that diet should be based on Dr. D’Adamo’s Blood Type Diet, thus type A and AB can skew towards a more plant-based diet, while those with blood types B and O should aim for a more paleo-style diet with high quality animal protein, organ meats, and healthy fats. Both groups benefit from including a good amount of fresh fruits (local) and vegetables.

Everyone should avoid those foods we all know are unhealthy, including margarine, most vegetable oils (except avocado, flax, and olive), refined carbohydrates and sugars, excess alcohol and caffeine, and GMO foods.

Sunlight exposure is essential, along with time in nature, and gentle exercise (at least until adrenal health has been restored), and, believe it or not, it is important to have some fun in life.    (Source)

Of course, I consider our AdrenalStart product to be one of the best formulas available for treating adrenal insufficiency, and thus a product that can also be helpful for treating sleep disorders related to the adrenals. We have had amazing feedback on this product over the years, including claims of improved sleeping patterns.

In a recent newsletter (Part One, Part Two), I examined all the ingredients of JointStart Supreme to see which had scientific veracity for treating leaky gut. In a similar vein, I decided to examine all the ingredients of AdrenalStart to see if any of them had scientific research clearly linking them to sleeping problems. This material will be found in the newsletters (under the “Resources” button, if you don’t subscribe to it), titled AdrenalStart for Sleep Disorders.

« PLACEBO vs NOCEBO
How Important Are Carbohydrates? »