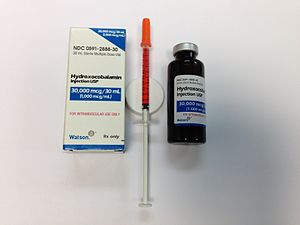 Testing For Vitamin B12

You think you may have a B12 deficiency, maybe because you have some of the symptoms listed below, maybe because you are just fatigued all of the time, or maybe just because you have mental fog too often. Your doctor tells you your lab results indicate that your B12 levels are fine, and you rest easy in the knowledge that at least that base is covered, and you can forget about B12 being an issue. Don’t rest too easy; that test is flawed, mostly because the bar is set too low, and there are other more accurate tests that could be done to truly confirm your B12 status.

Psychiatric Symptoms of B12 Deficiency

While doctors may still think of vitamin B12 mostly for its role in producing red blood cells (deficiency leading to pernicious anemia, resulting in fatigue), B12 also has a role in psychiatric symptoms, including anxiety, depression, and even various states of psychosis. (Acta Psychiatr Scand. 2003 Aug;108(2):156-9. “Catatonia and other psychiatric symptoms with vitamin B12 deficiency.” Berry N, et al.)

The body requires B12 to make the protective coating surrounding the nerves, known as myelin, so inadequate B12 can expose nerves to damage. Symptoms of such nerve damage can manifest as dementia, multiple sclerosis, and balance or walking disturbances.

Sufficient B12 is also required for the production of SAMe (S-adenosylmethionine), a “methyl donor” required for producing and metabolizing neurotransmitters, among other functions. Therefore, a deficiency in SAMe, induced by B12 deficiency, can lead to a variety of psychiatric ailments.

Over the past few decades psychiatric symptoms attributed to B12 deficiency have included: acute psychotic states; confusion; delirium (including with hallucinations); delusions; loss of memory; manic and schizophrenic states. (J Am Geriatr Soc. 1988 Dec;36(12):1105-12; “What are the psychiatric manifestations of vitamin B12 deficiency?” Hector M, et al.)

Now, these are all serious conditions, often horribly disrupting people’s lives, and usually resulting in people being put on a variety of potentially dangerous pharmaceutical drugs. The fact that many of these psychiatric conditions could be helped by something as simple, safe, and affordable as vitamin B12, deserves further exploration by a doctor before resorting to medications.

Why B12 Lab Results May be Useless

It is becoming obvious that B12 deficiency is commonly under-diagnosed, and missed by many medical professionals. This is due to two reasons: it is not a routine test used by most doctors, and the laboratory reference range bar is set too low. So even if you are tested, and the test comes back with “normal” levels of B12, we still cannot rule out a B12 deficiency.

I’ll throw some number around here, just in case any of you have a chance to actually look at your own test results, and to see how there are different standards in different parts of the world.

In the U.S. a normal reading for B12 is between 200 pg/mL and 350 pg/mL. However, two American experts in the diagnosis and treatment of B12 deficiency (S. Pacholok R.N. and J. Stewart D.O.) consider a B12 deficiency to exist when readings are below 450 pg/mL. And, even if the readings are above 450 pg/mL, but there are symptoms that may be associated with B12 deficiency, these experts will look at other markers that can indicate a B12 deficiency more complicated in nature than the common B12 test will reveal.

They will therefore use B12 treatment therapeutically for patients who show normal B12 levels, but also have elevated levels of urinary “methylmalonic acid” (uMMA), homocysteine, and/or holotranscobalamin.

In Europe and Japan the acceptable “normal” level of B12 in the blood is above 550 pg/mL, and anything lower than that is considered to be associated with symptoms such as cognitive decline, dementia, and memory problems.

It has been theorized that one reason for the lower rates of Alzheimer’s disease and dementia in Japan, is their willingness to prescribe B12 to people who, in the U.S., would be considered to have adequate levels of B12. This wider, therapeutic use of a simple, affordable, medical intervention may be saving them from dealing with a much more expensive and disruptive condition, as their population ages.

The Opinion of a B12 Expert

Now, we are going to have a close look at one medical professional’s approach to the B12 situation. The following material is based on an article written by Jonathan E. Prousky, ND, MSc; Chief Naturopathic Medical Officer, Professor, Canadian College of Naturopathic Medicine. He wrote an overview of his 12 years of using B12 (as well as other nutrients) to treat a variety of neuropsychiatric symptoms, for the Townsend Letter for Doctors, a journal that brings together conventional and alternative medicines.

The purpose of his article was “to show the rationality of using vitamin B12 therapeutically, even in the absence of classical deficiency.” He went on to say that “vitamin B12 ranks among the most useful, safe, and effective orthomolecules when treating a diverse array of neuropsychiatric conditions,” and “clinical improvement results when serum vitamin B12 levels are optimized or markedly increased following vitamin B12 treatment.”

We saw above that B12 deficiency in the U.S. is considered to be a test result below 200 pg/mL, yet in Canada, where Dr. Prousky resides, B12 deficiency is considered to be present if the blood levels are below 149 pg/mL. His feeling is that if the results are anywhere between 149 and 400 pg/mL then there should be a follow up use of the uMMA test, especially if the patient is showing any unexplainable symptoms.

Dr. Prousky has observed many patients with technically “normal” blood levels of B12, whose elevated urinary concentrations of MMA nonetheless indicated early signs of metabolic B12 insufficiency. His belief is that the urinary MMA test is far more effective than the serum B12 test in identifying those at risk of B12 deficiency, and even more effective at monitoring improvement in B12 levels following therapeutic treatment.

More Symptoms of B12 Deficiency

Now we are going to look at the wide range of symptoms that Dr. Prousky has observed being associated with varying degrees of B12 deficiency; see if you recognize any of them in yourself or loved ones. And if so, remember that you do not need a prescription to buy B12, not even in an injectable form (which can be obtained from compounding pharmacies in the advanced methylcobalamin form).

If you, or someone you know, appear to have any of the aforementioned symptoms that might lead you to think a B12 deficiency may be the cause, your first step is to get a test. This at least gives you a baseline to work from, which is necessary in order to see if your B12 levels are rising following therapeutic treatment. You may then seek a uMMA test if you feel that your blood levels of B12 are not indicating the whole story.

If you then feel that you need a therapeutic treatment, you should work with a health practitioner to determine the best form of supplementation (injection, sublingual or nasal), and the length of treatment.

Or, if you don’t have a practitioner that will work with you, just take the bull by the horns and try some sublingual B12 (like, perhaps, our Quick B12 product), and a few months later get another test to see if levels have adjusted upwards. If you see no benefit with a sublingual B12, but still believe that deficiency is at the root of your problem, or you have methylation problems, or advance neurological disorders (ALS, MS, Parkinson’s disease, Alzheimer’s disease, etc), you may wish to try injectable methylcobalamin, as in certain extreme cases it is more effective than the sublingual form.

So, I hope that doctors here in the West soon begin to question the lab results of their patient’s B12 tests, and consider using additional testing (like uMMA) to really be sure that one has adequate levels to protect their brains, and long term health. It is really the “ounce of prevention” approach to dealing with the aging baby boomers who will soon be clogging the medical system with ailments based on mental deterioration.

« B12 Supplementation: Not Just for the Elderly
10 Reasons You Need Silica »