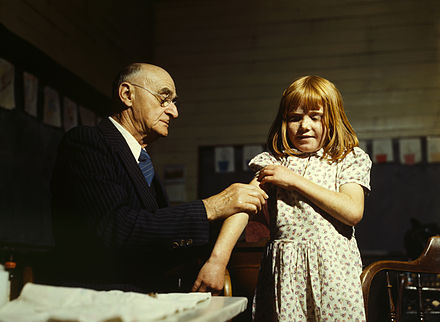 While the subject of this blog is protecting children, the material is, of course, also of value to adults who are being vaccinated. Everyone can benefit from taking these steps to protect themselves from potential side effects of vaccination, whether against measles and influenza (this vaccine contains mercury), or any other vaccines (e.g. vaccines required for travelling overseas).

Why Are There Toxins in Vaccines?

A vaccine is based on the principle that we can prevent disease by stimulating the immune system to respond to a particular pathogen. In order to accomplish this, vaccines are made with antigens: substances which stimulate an “adaptive immune response”. This triggers the immune system into a responsive state. The immune system then detects the virus we wish to protect against (the active component of the vaccine), and responds by creating a permanent (or semi-permanent) defense against that virus.

The antigens used in vaccines are made from weakened bacteria or viruses, or immune triggers such as aluminum. Aluminum is considered an “adjuvant” in this context. “An adjuvant is a pharmacological or immunological agent that modifies the effect of other agents. Adjuvants may be added to a vaccine to boost the immune response to produce more antibodies and longer-lasting immunity, thus minimizing the dose of antigen needed.”    (Source)

Vaccines also include preservatives, and stabilizers, along with other chemicals intended to make the vaccines more effective.

According to the Centers for Disease Control and Prevention (CDC), vaccines commonly include the following substances (all of which are well-known toxins):
-Aluminum gels, or salts of aluminum
-Antibiotics
-Formaldehyde
-Monosodium glutamate (MSG)
-Thimerosal (a preservative containing mercury)

Even though the amounts of these substances used in vaccines are small, they are all essentially toxins, toxins which are injected directly into the bloodstream of infants and children. Very young children have not yet developed an immune system sufficient to cope with these invasive toxins, and even older children, with poor immune systems, may have problems coping with these toxins.

Toxins, such as those found in vaccines, are damaging because they produce reactive oxygen species (ROS), many of which are free radicals. Free radicals steal electrons from healthy cells, leaving them damaged due to oxidation. Those damaged cells now require an electron, provided by antioxidants, in order to be restored to being a healthy cell. And this is one place we can begin, when looking at mitigating the damaging side effects of some vaccines.

Vitamin C is a strong antioxidant, one that is able to reverse oxidation, in essence neutralizing the damage caused by exposure to toxins (such as those found in vaccines). And indeed, in a number of animal studies, vitamin C has proven to be highly effective at neutralizing mercury toxins (found in some vaccines).

In one clinical study, vitamin C prevented the death of animals given fatal doses of mercury chloride (Mokranjac and Petrovic, 1964). In another study, vitamin C ingestion prior to mercury exposure was able to prevent the kidney damage mercury normally caused (Carroll et al., 1965). Vitamin C also prevented death in animals poisoned with mercury cyanide (Vauthey, 1951), and other toxic organic forms of mercury have also been shown to be effectively detoxified by vitamin C (Gage, 1975).    (Source)

Dr. Thomas Levy, MD, has a protocol for using vitamin C to help children better cope with potential side effects from vaccination: “For optimal antibody support and toxin neutralization, it would be good to dose the vitamin C for three to five days before the shot(s) and to continue the vitamin C for at least two to three days afterwards…Even taking a one-time dose of vitamin C directly before the injections can still have a significant toxin-neutralizing and antibody-stimulating effect. It’s just that an even better likelihood of having a positive outcome results from extending the pre- and post-dosing periods of time.”

“When dealing with infants and very young children, a 1,000 mg dose of liposome-encapsulated vitamin C mixed into something like yogurt can work very well. If this form of vitamin C is not available, sodium ascorbate powder will work quite well. Infants under 10 pounds can take about 500 mg in fruit juice or water, and those between 10 and 20 pounds can take from 500 to 1,000 mg.”     (Source)

Vitamin C can also actually help the vaccine by optimizing the body’s immune response to the antigens. Again, here is Dr. Levy: “Vitamin C has been documented to augment the antibody response of the immune system. As the goal of any vaccination is to stimulate a maximal antibody response to the antigens of the vaccine while causing minimal to no toxic damage to the most sensitive of vaccine recipients, there would appear to be no medically sound reason not to make vitamin C a part of all vaccination protocols.”    (Source)

Given that Dr. Levy suggests the use of liposomal vitamin C, I will include here a link to our product: Nutristart Liposomal Vitamin C

Parents who have concerns about vaccinating their children are often most concerned about the presence of mercury in some vaccines.

Thimerosal is an antiseptic compound containing almost 50% ethyl mercury, which has been used for years as a preservative in many flu and infant vaccines. Methyl mercury is highly neurotoxic, especially to developing brains.

Given the chemical nature of mercury (“it has a high affinity for thiol groups”), the thiol-containing antioxidant, glutathione, provides our main intracellular defense against neurotoxicity induced by mercury.

Let’s look at a clinical study on the subject.

“Thimerosal-induced cytotoxicity was associated with depletion of intracellular GSH ( glutathione) in two different cell lines. Pretreatment with… glutathione or N-acetylcysteine (NAC)… resulted in a significant increase in intracellular GSH in both cell types. Further, pretreatment of the cells with glutathione or NAC prevented cytotoxicity with exposure to 15 microM Thimerosal…The potential protective effect of GSH or NAC against mercury toxicity warrants further research as possible adjunct therapy to individuals still receiving Thimerosal-containing vaccinations.”    (Study)

Although Thimerosal has been recently removed from most children’s vaccines, it is still present in flu vaccines given to pregnant women, the elderly, and to children in developing countries. Clearly increasing glutathione levels in children and infants before and after vaccinating them can be of great value in protecting against mercury toxicity. But there is still more to say about glutathione.

Conventional media (fueled by pharmaceutical companies) has convinced most people that the relationship between vaccination and autism has been disproven, however that subject is still open for debate. (For a complete analysis of the subject, follow the link at the bottom of this section.)

The Environmental Working Group carried out an investigation over one and a half years, which identified a biomarker in autistic children indicating there is a subset of children susceptible to developing autism from some vaccine components.

This contributes to the understanding that there are different levels of vulnerability to toxic substances, including, but not limited to, mercury.

This impairment shows as a severe deficiency in the body’s most important antioxidant and heavy metal detoxifier, glutathione. “When compared to normal health children, autistic children showed a significant impairment in every one of five measurements of the body’s ability to maintain a healthy glutathione defense. These findings are strong evidence that if these children were exposed to a potentially toxic dose of mercury or other compound they would be much less able to mount an effective defense.”    (Source)

These findings help us understand the mechanism of autism, allowing for an integration of its many facets, something which has confused those scientists who have tried to narrow the cause down to one gene, or one toxin.

Of course, finding that some individuals are predisposed to low glutathione levels (and thus more prone to being damaged from toxins and heavy metals), has implications beyond the association between mercury in vaccines and the development of autism. It may be the increasing rates of behavioral and learning disorders are also a result of more children born with this increased sensitivity to the effects of toxins.

In part two of this blog (to follow next week), I will go into more detail about the use of glutathione to counter any potential damage from vaccination. As well, I will take a closer look at how to deal with the aluminum component, and will show why you should never give children Tylenol to treat vaccine side effects (such as pain and inflammation).