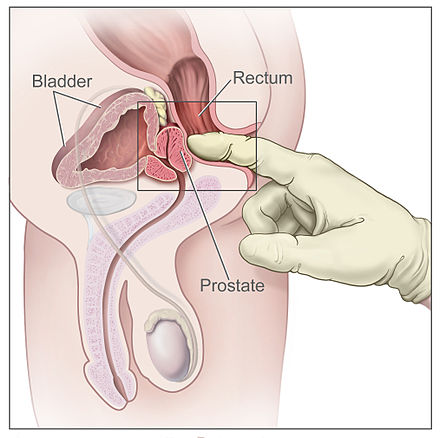 First let’s get a look at that prostate. The prostate is a cluster of small, doughnut-shaped sex glands. They encircle the urethra (the tube which conveys urine and semen) just below the bladder. Though all the functions of the prostate are not yet clear, its most direct purpose is to contract during ejaculation, squeezing the seminal fluid into and through the urethral tract. Because the prostate is located so close to the urethra, any problem with the prostate can hinder the free flow of urine.

About 50% of men between the ages of 40 and 60 have the most common disorder of the prostate gland: benign prostatic hyperplasia (BPH). Symptoms of BPH include increased frequency of urination, waking at night to empty the bladder, and reduced force and caliber of urination. It is believed that BPH is caused by an accumulation of testosterone in the prostate. Within the prostate the enzyme known as 5-alpha reductase converts the male sex hormone, testosterone, into another more potent hormone known as dihydrotestosterone (DHT), the same hormone linked to causing Male Pattern Baldness.

DHT controls the division of cells in the prostate. This compound stimulates the prostate cells to multiply excessively, eventually causing the prostate to enlarge. Normally DHT would be excreted from the prostate gland in sufficient quantity to prevent enlargement. However, if there is an imbalance between the male hormones (androgens) then the DHT is not adequately excreted, causing the prostate to swell. Examination of an enlarged prostate usually reveals three to four times the normal levels of DHT.

The second most common ailment of the prostate is prostatitis, which is a swelling of the prostate gland caused by bacterial infection. This can occur at any age and the symptoms are more severe than those of BPH. It begins with irritation during urination, then pain between the scrotum and rectum, pain in the lower back and ultimately, blood in the urine. Urine flow can be partially or totally blocked, which can lead to urine retention in the bladder, in turn causing urinary infections. Currently there is a link between accumulation of the metal nickel in the prostate and chronic prostatitis (See Blog: Out of the Frying Pan).

The greatest danger that follows either of the aforementioned problems is that of a possible malignant change occurring. The metabolites (breakdown products) of cholesterol are cancer producing and have a tendency to accumulate in the prostate gland. These metabolites initiate degeneration in the prostate cells, which can promote prostatic enlargement.

It is interesting to note that as little as a hundred years ago, prostate problems were rarely mentioned in medical literature. This implies a link to the modern lifestyle, most likely to diet. Indeed, the connection between diet and prostate cancer has been clearly established. There is a high correlation between prostate cancer and fat consumption. Worldwide autopsies reveal that wherever the diet is similar to a typical North American one (i.e. high in animal-fat consumption ) nearly 25% of all men develop latent cancer of the prostate by the time they reach old age.

A few years ago, The Journal of the National Cancer Institute reported that men who ate red meat at least five times a week had a two and a half times greater risk of developing prostate cancer than did men who ate red meat less than once a week (based on a study of 51,000 men). A study by the Chief of Urology at the Metropolitan Hospital in New York found that men with BPH had 80% more cholesterol in their blood than those without the condition. Remember that sex hormones are built in the body from cholesterol, so there is a pretty direct link between cholesterol and testosterone.

Maintaining safe cholesterol levels obviously involves watching saturated fat consumption, but it also must include restricting sugar intake and ensuring an adequate amount of fiber. Both sugar and fiber are involved in the body’s ability to process and utilize cholesterol, either for good or bad. Another good reason to include high fiber content in your diet is the need for bowel regularity.

Constipation is a frequent symptom accompanying BPH. It is implied that the long-term increase in pressure creates congestion in the lower pelvic region, where the prostate lies. Putrefying matter in this area can also contribute to prostatitis as constipation produces a cesspool of bad bacteria, which can infect the prostate gland. Thus it is important to take a good quality probiotic (acidophilus) on a regular basis if we have any such problems.

It must be mentioned that 20 years ago the approach to prostate cancer was “you’ll die of old age before prostate cancer kills you.” At some point in the last two decades the medical profession started diagnosing and treating prostate cancer, and now it is one of the leading causes of death among men. The prime tool used to track the health of the prostate, aside from the finger test (digital rectal exam) that the doctor uses to check for BPH, is the PSA (prostate-specific antigen) test.

The validity of this test has been questioned for some time now, but even more so with the release of two large international studies in March ’09. Following the release of these studies the Canadian Cancer Society announced: “Not only does it not appear to reduce death rates from prostate cancer overall, but there are significant harms associated with prostate cancer testing with PSA.” The “harms” mentioned, refer to the unnecessary surgery that may then occur, leading to many men suffering with incontinence and impotence following treatment.

While this protein produced by the prostate may indicate prostate cancer when found at high levels in the blood, it may also indicate infection, irritation or BPH, and, one may have prostate cancer without having elevated PSA levels. A further debatable action is the biopsy following the high PSA reading. This invasive technique punches holes in the prostate to accumulate enough matter to biopsy, meanwhile causing pain, bleeding and inflammation. As cancer is in part an inflammatory condition, subjecting a delicate organ to this abuse may even cause a worsening and/or spreading of what cancerous cells may be present.

In the two studies that questioned the effectiveness of PSA testing, men aged 55 and older were followed for about a decade (75,000 in the American study and 182,000 in the European study), in both cases half the men received PSA tests and half did not. The prostate cancer death rate “was very low and did not differ significantly” between the two groups of men, and “was associated with a high risk of over-diagnosis.” “All and all it is really not a very effective tool to screen for prostate cancer,” said Heather Logan, a senior director at the Canadian Cancer Society.

Evidently, the PSA test has its place as one form of feedback, to be balanced out by other diagnostic techniques, but should not be relied upon singly as being the determinant of prostate cancer. A good doctor will use it as a guide, observing it over years and, if the levels are constantly rising over time, other tests may be called for before we get to the biopsy and treatment phase.

« PROSTATE DISORDERS – Part two
OUT OF THE FRYING PAN »