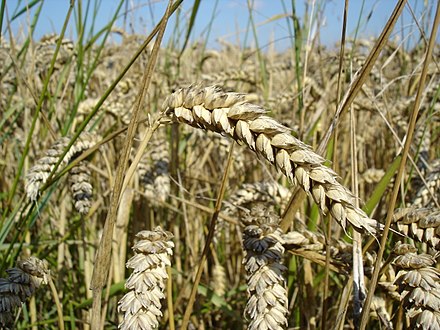 JUST HOW BAD IS WHEAT?

Up until recently, my belief on the value of wheat in the modern diet was based mostly on the principles of the blood type diet. My blood type (AB) seems to digest wheat alright, and I have no digestive problems from it, unless I eat more than a couple of pieces in a day, and then I can get an acidic stomach. Most of us are aware that refined wheat flour is high on the glycemic index (a measurement of how much foods cause an insulin spike), much akin to white sugar, and so should be avoided by those attempting to reduce body fat. The current belief in the natural foods field is that by grinding and using the whole grain, the presence of the bran and fiber slows the insulin spike of the flour, and the presence of the germ of the grain offers the nutritive benefits.

In the 70’s health guru Paavo Airola maintained that we were better off eating white flour than whole wheat flour and he had a very good logical argument for that. The germ, the most nutritious part of the wheat, and sold commonly in those days as a health food supplement, is where the vitamin E and other fat based nutrients are. Because fats are so prone to rancidity, when we grind the germ and the whole wheat flour sits around for long periods, these oils go rancid.

Given the dangers of rancid oils, which produce free radicals, we would be better with the white flour, which would at least be less damaging. Perhaps this is why I find that commercial brown breads usually have a slightly sweet taste; they may be masking the bitterness of the rancid germ with sugars.

Now, locally we have a bakery that produces the best bread I have ever had. They, as was traditionally done, grind the grain the same day that they bake it. They use 100 year old sourdough starter instead of yeast and bake it in a wood fired oven. Baking this way may even keep gluten from being a problem for those who are not celiac, since one argument is that gluten is warped into an indigestible substance by modern high temperature baking in electric ovens. You can’t get a more healthful, or tasty, whole wheat bread than this.

What Happened to Wheat?

Surely bread made like this must be the epitome of a quality wheat product. Well, perhaps not, at least according to Dr. William Davis, author of “Wheat Belly”. Dr. Davis, a cardiologist, has discovered that wheat today is not the same as wheat of even just 50 years ago. That is when industry started aggressively crossbreeding and hybridizing the wheat plant in order to make it drought and fungi resistant, and to dramatically increase its yield.

While many of us today are just grateful when a food has not been genetically modified, it turns out that such extreme hybridization will change the structure of the protein in the grain almost as badly as genetic engineering can. These extreme techniques, unlike simple selective crossbreeding of plants, included using gamma irradiation and the highly toxic poison sodium azide. And since this occurred quite some time ago, the same seed stock is now grown as “organic”.

Dr. Davis maintains that the high levels of amylopectin A found in wheat cause it to in fact spike blood sugar even more so than white sugar.  A couple of hours after that spike, of course, the blood sugar plummets, leaving us tired, foggy and hungry. He believes this creates a cycle of constantly eating and being hungry again shortly thereafter, leading to chronic overeating.

According to Davis he has seen countless patients cut out wheat, thereby eliminating the appetite stimulant and the insulin spikes, and in turn lose unwanted body fat. The reason Dr. Davis’ book is called “Wheat Belly” is that continuous insulin spikes lead to the most dangerous kind of fat build up, called visceral fat. This fat build up around the internal organs, which shows mostly in an expanded belly, is well linked to heart disease and diabetes.

It’s Not Just About Weight Loss

Those who are not overweight may think that most of this doesn’t apply to them, but there are other factors at work. It is well known that a diet high in refined carbohydrates also creates a dangerous form of cholesterol in the blood. These low-density lipoprotein (LDL) particles are linked to building up atherosclerotic plaque in the arteries, and so are a step towards heart disease and stroke. Also, eating excessive refined carbohydrates, which are high glycemic, leads to glycation, a process whereby proteins are damaged by glucose. This can lead to arthritis, cataracts, and premature aging.

If all that isn’t bad enough, Dr. Davis goes on to define wheat flour as addictive. Not a real surprise since essentially sugars are all technically addictive, just because of the blood sugar spike that makes you feel good briefly, and then the ensuing crash that makes you seek another pick-me-up. But, more than that, he points out that polypeptides from gluten cross the blood brain barrier and attach to opiate receptors in the brains (based on research from the National Institute of Health).

Dr. Davis warns that while there is a mild euphoria after eating wheat (something that can be blocked by giving opiate blocking drugs used to treat heroin addicts), there are also often unpleasant symptoms of withdrawal when people stop eating wheat flour, often lasting up to a week.

Wheat, worldwide, amounts to about 20% of the human diet. In the natural foods field it is believed that any food that represents one fifth of your diet, and is genetically unvarying, can lead to allergies building up. Wheat clearly is one of the most common allergens, aside from the gluten issue. Normally, in traditional farming, a crop would vary in its genetic make-up from crop to crop and harvest to harvest, and it would be less likely to create digestive problems. But wheat is a fixed hybrid structure and so there is no genetic variance, even when we choose organic.

There are a few options for those unwilling to forgo wheat and breads entirely. One option is Rye, a plant lower on the glycemic index than wheat (though considered unsuitable for type B blood). The thing to watch with rye bread is that it is often made with wheat flour in order to make it less dense and fluffier than bread made with rye alone, so be sure to read the label.

As well, we now have ancient rediscovered grains that are relatives of wheat, but non-hybridized. These include Einkorn, Farro (emmer wheat), Kamut and Spelt. These grains, found mostly in natural food stores, used in moderation, should serve as more healthful alternative to commercial wheat products. And, of course there are the gluten free options of bread-like substances, mostly made from rice flour