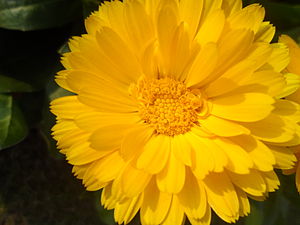 NutriStart is proud to introduce our new skin cream, NUTRIGLO, a synergistic blend of VITAMIN K2, VITAMIN D3, and VITAMIN A, in a CALENDULA base, and free of harmful chemicals. Each of the vitamins in the NUTRIGLO cream has been used alone to treat a wide range of skin ailments. Now they have been combined into one formula for even more fast acting, and effective benefits.

Between them, these vitamins have been used topically to treat symptoms of Acne, Eczema, Psoriasis, Rosacea, Spider Veins and Wrinkles, and virtually any skin condition that involves inflammation or irritation. Let’s have a closer look at the wide range of benefits that can be obtained by using these three powerful vitamins in a topical form.

TOPICAL USE OF VITAMIN K2

Vitamin K’s beneficial support of the circulatory system means that it can be helpful for a number of skin conditions.

VITAMIN K CREAM FOR BRUISES
Bruises are formed when a bang or a knock breaks capillaries, causing them to leak blood close to the skin’s surface, forming an unsightly purple or brownish mark. Medical studies show that smoothing vitamin K cream onto the affected area can limit the leaking, reducing the severity of a bruise, particularly if applied soon after the trauma. Vitamin K cream has been shown to be even more effective if it also contains retinol (vitamin A). Gently rubbing the cream onto a bruise twice a day also helps to break down the blood and assist the body in absorbing it, encouraging the bruise to fade faster.

VITAMIN K CREAM FOR DARK CIRCLES UNDER THE EYES
Dark circles under the eyes are similar in nature to a bruise therefore vitamin K cream should work to help eliminate dark circles, and puffiness, under the eyes. Some dark circles, like bruises, are caused by broken capillaries leaking blood into the delicate under eye area, where the skin is thin and the blood is clearly visible in the form of dark bags.

Applying a vitamin K cream can reduce the discoloration by causing the blood to clot, stopping it from spreading, while also helping to prevent further leakage from the capillaries. The most effective creams for this condition also contain vitamin A, which helps produce collagen, strengthening the thin skin under the eyes.

Studies from the American Academy of Dermatology (2003) showed that topical vitamin K worked to reduce both bruising, and dark circles under the eyes. This was backed up by a study published in the Journal of Cosmetic Dermatology, where doctors from the Nippon Medical School in Tokyo found that the topical application of a gel containing a derivative of vitamin K (along with some vitamins A, C, and E) was also effective in reducing dark under-eye circles.

VITAMIN K CREAM FOR SPIDER VEINS
Applying vitamin K cream to the skin can help to reduce the appearance of spider veins and broken capillaries. Spider veins also behave similarly to bruises, because they are both caused by the pooling of blood from damaged blood vessels. And, since vitamin K is known to reduce bruising, it should therefore also reduce spider veins, however no medical studies have yet been done to prove this to be true. Nevertheless, in the United Kingdom, doctors currently recommend the use of creams containing 5 % vitamin K, to aid in reducing the spider veins.

VITAMIN K CREAM FOR COSMETIC SURGERY
To help improve healing after cosmetic surgery, plastic surgeons usually prescribe vitamin K cream to reduce bruising and scarring, during the recovery period. Applying a vitamin K cream regularly for two weeks before facelift surgery, can also help limit postoperative bruising. One medical study has shown topical application of vitamin K reduces bruising after facial laser treatments and would also be likely to help fade bruises caused by other nonsurgical treatments, such as the use of fillers on facial lines.

A small study showed that topical application of a cream with at least 1% vitamin K shortened the amount of time that skin is reddish-purple after a pulsed dye laser treatment. This indicated vitamin K has an anti-inflammatory effect on skin (Source: Dermatologic Surgery, December 1999)

VITAMIN K CREAM FOR OTHER SKIN CONDITIONS
Vitamin K cream has been used to treat red, irritated skin, and skin that suffers from rosacea. Burns may heal and fade quicker when treated with vitamin K cream, and regular use also can reduce the appearance of scars.

TOPICAL USE OF VITAMIN A

Dermatologists have prescribed vitamin A creams for over 25 years for a variety of conditions.

VITAMIN A CREAM FOR ACNE
The original purpose of vitamin A cream was to fight acne and it is still an effective treatment for that condition. Vitamin A creams are the most hydrating of the topical vitamin A products, as other forms can be too drying. Applying vitamin A cream once or twice daily, will usually cause acne to dry up and start to disappear.

VITAMIN A CREAM FOR WRINKLES
Vitamin A cream can reduce wrinkles, and help to promote the production of skin-building compounds. According to a study from the Archives of Dermatology, vitamin A topically can reduce fine lines and wrinkles because it increased collagen, and glycosaminoglycans in the facial tissue. Glycosaminoglycans work to lubricate and maintain tissue hydration by attracting water to the cells.

VITAMIN A CREAM FOR OTHER USES
Vitamin A cream can be used to treat oily skin, skin lesions, flat warts, psoriasis and thickened skin. Vitamin A cream attacks these conditions either by drying them out, as in the case of oily skin, or by making the skin exfoliate more rapidly. In the treatment of psoriasis and thickened skin, the cream causes the skin to shed faster, allowing the damaged skin to be removed from the surface faster than it would normally be. This allows new, healthy skin cells to form more rapidly.

TOPICAL USE OF VITAMIN D3

Vitamin D, as a topical treatment, is most commonly used to treat psoriasis, a skin condition characterized by dry, red, flaky skin. Application of vitamin D cream to the affected spot may help relieve the symptoms commonly associated with psoriasis and also may help to prevent scarring.  (Study)

According to Web MD, vitamin D is commonly recommended as a treatment for eczema, vitiligo and scleroderma. Vitamin D is also effective in improving symptoms such as itching, flaking, and redness. Overall skin dryness can be significantly improved with the use of a vitamin D cream, and the antioxidant properties of vitamin D can help to prevent premature aging and damage to skin cells.

NUTRIGLO contains a base of Calendula cream. The herb Calendula, also known as marigold, with its characteristic orange flower, is a member of the daisy family and has been used medicinally for centuries, both internally and externally.

Calendula cream is mainly used to treat acne, bruises, burns, diaper rash, skin irritations, sunburn, and open wounds. Calendula generates the growth of new capillaries, which improves blood circulation, in turn helping skin to heal by increasing the speed of tissue repair. The cream also has a soothing effect on the tissue surrounding a burn or wound, which offers relief from itching or pain.

SYNERGISTIC COMBINATION
While each of the vitamins discussed stands on its own as a method of topical healing, as does the herb Calendula, clearly a combination of all of them will prove to be a faster healer, with a wider range of benefits than any one substance can attain solo. And, our anecdotal feedback has supported this belief, with people finding relief from common skin ailments, like eczema and psoriasis, usually within a week.

For information on what to take internally to help treat skin ailments, have a look at the blog titled “Treating Skin Conditions”. For a serious or chronic skin condition it will always be most effective to combine an internal treatment with the external one.   (Blog)

WARNINGS
Vitamin A topically can increase sensitivity to sunlight. Thus NUTRIGLO should not be used on exposed tissue, if one is out in the sun.

Side effects of vitamin A cream used clinically to treat acne can include redness, burning, peeling or sensitive skin. Side effects associated with vitamin D topical treatments include a burning sensation, light sensitivity, inflammation, skin lesions, or hives.

In cases of recorded side effects, the vitamins A and D used were synthetic analogues (pharmaceutical products), and were used at high doses. Since NUTRIGLO uses natural forms of vitamins, at moderate doses, it is unlikely to have any side effects.

« How 3 Nutrients Can Heal Most Ailments
Preventing the Flu Naturally »