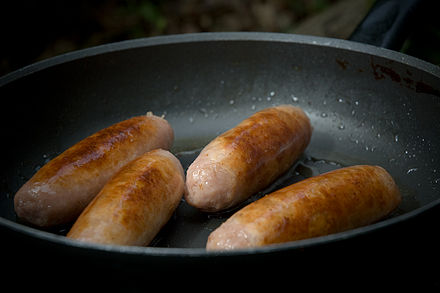 FRIED FOODS SAFE WHEN COOKED IN THE RIGHT KIND OF OIL

Even though frying makes foods taste better due to “browning” and increasing crunchiness, fried foods have had a bad reputation in the health field for some time now. But, a recent study published in the British Medical Journal has indicated that it is not so much the frying, as the type of oil that the food is fried in. Now, the people in this study, some 40,000 of them followed from the 1990’s to 2004, were Spanish, and thus essentially followed what is known as the “Mediterranean diet”, which is already considered a more healthful diet than the standard North American diet.

But still, the researchers noted no association between frequently eating fried foods and serious heart disease. This is a country “where large amounts of fried foods are consumed both at and away from home…” In this study about 7% of total food consumed was fried. And the oils that they used to fry with were olive and sunflower, though 62% used olive oil, the rest using sunflower or other vegetable oils.

While two other European studies also showed no link between heart disease and fried foods, the researchers did note that North American fast food restaurants tend to cook in re-used oils, high in trans-fats. From this perspective we must also note that the quality of food being cooked is another factor. The Mediterranean diet, which is high in vegetables, along with a moderate amount of high quality protein, is a far cry from commercial fried foods in North America.

Of course, when food is fried its nutritional content will be changed. The food trades off water for fat increasing its caloric content and frying degenerates the oils, due to the high heat. During this process of oxidation of the oil, and during hydrogenation (as with margarine,) the structure of the fats changes turning unsaturated fats into trans-fats. . Olive oil being the dominant oil used by those in the study, I would assume that it gave the greatest weight to the benefits shown in the study. This makes sense because it is a mono-saturated oil whereas other vegetable oils are polyunsaturated oils, and are much more likely to be damaged by high temperatures.  (Study)

New research out of Denmark took a look at the prevalence of PFC’s (perfluorinated compounds) in the modern environment, and what affect that is having on children. PFC’s are toxic and cumulative and are found everywhere, because they are water and grease resistant. Thus they are used to treat carpets, rain gear, popcorn bags, non-stick cookware, paper plates, and are used in fast food packaging. Up to 60% of paper bags and cardboard boxes used for food packaging contain PFC’s. Aside from absorbing these substances from the food found in this type of packaging, it can also be absorbed from dust coming off of treated upholstery and textiles.

This study showed that those children with the most PFC’s in their blood had the least amount of antibodies that fight infection in their blood. “It could affect the response of the immune system to infectious disease and how we respond to microorganisms in general.” ( Philippe Grandjean, University of Southern Denmark) The other main concern in the study was the reduced response to vaccines shown in those children with the most PFC’s in their bodies. Because these compounds can be passed through the placenta, and through breast milk, high levels of PFC’s in a mother’s blood reduces the ability of their offspring to produce antibodies years later in their lives.

When a child’s exposure to PFC’s is doubled their immune responses are cut in half. The children with the most exposure to PFC’s by the age of five still had weak antibody levels two years later. The only comparable effect on immunity and response to vaccination in children is found in rare medical conditions, and when they are exposed to anti-cancer drugs or radiation treatment.

There are now products that are marketed as PFC-free (for example, Du Pont currently makes a PFC-free non-stick frying pan), and studies such as these may pave the way for a consumer backlash, that speeds up the process of reducing their use in common products. The upsetting part of this study, for me, is that it was based on following almost 600 kids living in the Faroe Islands, an isolated fishing community in Northwest Scotland. If even in this remote location the children were fully exposed to this chemical, what is the level to be found in our city kids?   (Study)