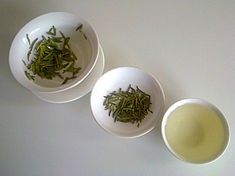 Green Tea Protects Us From Radiation, EMF’s And Alzheimer’s

I have lately become convinced that Green Tea is one of the most valuable foods/herbs that we can ingest on a daily basis, for ensuring optimal health and longevity.

Green tea has already proven itself to be an amazing substance, being pretty much anti-everything bad. It is: anti-inflammatory, anti-carcinogenic, anti-bacterial, anti-viral, and a powerful antioxidant.  (For some detailed information on these properties, visit the product information page for QUICK TEA on the Nutristart website)

What has really brought the necessity of regular green tea consumption home for me is based on the research I have been doing for volume 2 of my book “Health Secrets for the 21st Century”. A good portion of this sequel is covering the damage done to humans by gamma radiation and electromagnetic radiation (including cell phones and towers, smart meters, and wireless). And, it turns out that green tea is highly protective against both gamma radiation (ionizing radiation) and electromagnetic radiation (non-ionizing radiation) as well.

Green tea is a powerful antioxidant, protecting against general free radical damage. Since much of the damage done by exposure to radiation is this type of damage, it is no surprise that green tea specifically protects against the side effects caused by exposure to gamma radiation.

The particular component of green tea that is most studied, and considered to be most protective against radiation, is the polyphenol EGCG (epigallocatechin gallate). In animal studies, EGCG protected the mice from whole-body radiation, both blocking lipid oxidation and prolonging their life span. This component of Green tea especially protected cells in the intestines, and hair follicles, from the damaging effects of radiation.

Yet, the study below concluded that: “The results indicate that Green Tea and Green Tea Polyphenols may have a major radioprotective effect. Each one of the catechins was a much less effective radioprotector, suggesting that total extract or a mixture of GTPs may be more effective than individual catechins.”

This conclusion confirms the idea that using the whole plant, whether as brewed tea or a non-standardized, whole tea supplement, is the best approach to getting full value from green tea. One such product is NutriStart’s Quick Tea liquid tea concentrate, which I will discuss further on.

Another piece of news that provides more encouragement to be a regular consumer of green tea is this recent discovery of how it can also help to prevent Alzheimer’s disease.

The European Journal of Neuroscience has published a new study examining the protective effects of tea extracts on cell cultures treated with amyloid proteins. These proteins are indicative of Alzheimer’s disease and other forms of dementia. Both green and black tea extracts protected against the damaging effects of the amyloid proteins, due to the presence of the catechins EGCG and gallic acid. However green tea has over 4 times the content of catechins than black tea does, and so is a better dietary choice if you are seeking protection for your brain.

Finally, we have one more study, this one indicating that regular green tea consumption will help us to maintain functional independence as we age. This study, published in the American Journal of Clinical Nutrition, found that elderly people who drink green tea regularly stay more agile and independent than those who do not.

Previous studies have established that green tea consumption is associated with a lower risk of diseases that cause functional disability, such as stroke, cognitive impairment, and osteoporosis. This more recent study, done in Japan, tracked nearly 14,000 people for 3 years, the objective to determine the association between green tea consumption and the incident of functional disability in elderly individuals.

Their conclusion was that: “Green tea consumption is significantly associated with a lower risk of incident functional disability, even after adjustment for possible confounding factors.”

The researchers assumed that this benefit was probably due to the high antioxidant levels found in green tea. By examining the study we find that the greatest benefit occurred for those who consumed 3 to 5 cups of green tea per day.

Since the benefits of green tea accrue at 3 to 5 cups per day, it can be difficult for those who are not big fans of the taste of green tea to get to the therapeutic intake level. Personally, I prefer coffee, so the Quick Tea has been a great way for me to get my 3 to 5 cup equivalent dose.

The other important thing to know about the therapeutic advantages of green tea is that at least three of the benefits are based on using a liquid medium, versus simply taking capsules. When green tea runs through the mouth it kills the bacteria that causes bad breath and cavities, and works to prevent oral cancer. These potential benefits are lost when we just swallow a capsule.

The other problem with capsules is that they are usually standardized to one catechin, usually EGCG, and often have the caffeine removed. As the two references below indicate, it is ideal to take green tea in a form as close to a whole food as is possible.

“While the Mayo Clinic researchers identified one particular green tea polyphenol, EGCG, as having the greatest anti-tumor activity, Japanese medical researchers reported in 1998 that the “non-phenolic fraction has potent suppressive activities against tumor promotion.”   It is all of the myriad compounds naturally present in the herb that have caused green tea to be revered by both traditional medicine and newly appreciated by modern science.  An extract of green tea should mimic, as closely as possible, the constituents in the traditional form of green tea consumption” (Beyond Aspirin: The Cox-2 Medical Revolution, Thomas M. Newmark and Paul Schulick, 2000, Hohm Press).

One serving of Quick Tea (1ml or 30 drops) is roughly equal to one cup of green tea, therefore by simply ingesting that amount 3 to 5 times daily we get all the benefits of being a regular green tea drinker.

Quick Tea is a great way to kick up your bottled water and easily turn it into a health beverage. It can also be added to any liquid including coffee, juice, soda, or even wine. Add Quick Tea to a small amount of water and rinse the mouth for a quick mouthwash that kills unhealthy bacteria.

Personally, I just squirt the serving (roughly, one doesn’t have to be that accurate with the amount of drops in a serving) directly under my tongue 4 or 5 times a day. It tastes good and I like the feeling in my mouth. And, most importantly, I obtain all the benefits of being a full time green tea drinker, while still indulging my preference for coffee.

« Preventing The Flu Naturally – Part 3
B12 Supplementation: Not Just for the Elderly »