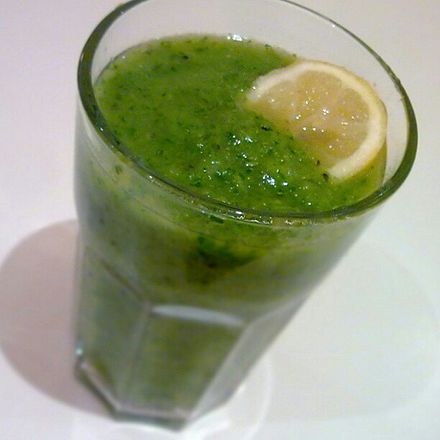 The popularity of the so-called “green” drinks has lead to an explosion of product in the marketplace. Thus we once again find ourselves overwhelmed by choices and the ensuing marketing campaigns. In this newsletter I will attempt to simplify it a bit, in order to aid you in picking a green product, should you feel you the need for one.

Why, indeed, would you need one? The long and short of it is: do you eat 5 to 7 servings of fruits and vegetable daily? These drinks are marketed as an alternative to real food, and while that may not be 100% true, it is pretty tricky to get 7 servings of fruits and veggies daily. We want these foods for a number of reasons, most importantly for antioxidants, fiber and to alkalize our bodies.

Antioxidants, which are found at much higher levels in berries than vegetables, can protect us from premature aging, cancer and other diseases. Fiber intake is critical to preventing bowel cancer, and for stabilizing insulin levels, which both prevents diabetes and excessive weight gain. And, keeping our bodies more alkaline than acid is the key to general health and well being, and is especially important for preventing cancer and osteoporosis.

When you pick up a green drink you are going to get antioxidants, trace minerals and other subtle nutrients not found in vitamin pills, and as well, you will get the pigment chlorophyll, which is what makes something green. Chlorophyll is an amazing detoxifier, cleansing the bowel, blood and liver. It also builds red blood cells and so is important to maintain vitality.

What you are not going to get much of is fiber, so you can add a fiber drink to your regimen (I mix defatted flax powder with Inulin, derived from chicory, this gives me a mix of the benefits of both soluble and insoluble fiber.) And if you call your green drink breakfast you are also not going to get any protein, which I didn’t mention as a benefit of fruits and vegetables, since they don’t contain much.

Now, there are two things to look at when choosing a green drink. First, look at the list of ingredients, which are in descending order from most to least. There are two general categories of these drinks, those in which lecithin is the first ingredient and those, generally more expensive ones, which do not contain lecithin. Lecithin, derived from soybeans, is a wonderful substance with the ability to improve short-term memory, and the function of cleaning fatty deposits off of the liver and out of the arteries.

However, it is a relatively cheap substance to purchase on its own, which is why the more expensive products don’t contain it. These products give you more of the actual fruits and vegetables along with the concentrated cereal grass juices, herbal concentrates and super foods such as royal jelly, bee pollen and algae. If the focus is on fruits and vegetables, be sure that they are organic, as non-organic fruit especially can be high in pesticides.

The other questionable thing about the combination greens products is the amount of ingredients in that combination. The oriental approach to diet is two-fold: eat what grows within 500 miles of where you live (because only in our recent history could a human travel further than that) and eat simply to keep your thinking simple. This does not mean that it keeps you simple minded, but rather that we tend to already be over stimulated and to think too much, often to the point of anxiety and sleep disorders.

When I combine 30 different substances from different areas of the world into one meal, this is far from simple. Also this type of product may include a number of herbs that are generally best taken for short periods in order to prevent a tolerance building up, lessening their general effectiveness. As well, if you are prone to allergies which one of the 30-some ingredients is the one that is problematic for you? And, of course, if one product has 30 ingredients the next one on the block has to one-up them by having 40 ingredients, then 50 ingredients. It’s time to stop the madness!

How about one ingredient? These substances all have different properties. Grasses are considered “yang” and “grounding” because they grow in the earth. This would be good for vegetarians. Algae such as spirulina and chlorella, are considered more “yin” because they grow in water, and would generally be good for meat eaters, who already have a yang diet. Spirulina is considered a “damp” food by the Chinese, and so should be avoided in excess by those with candida problems. Barley grass and chlorella are both good for “kidney essence” which is our storehouse of vitality, and so are both very good for the aged. Chlorella is a master detoxifier especially of chemicals and mercury.

Point being that sometimes it makes sense to get a sense of one substance to see how our body likes it. Or to get enough for therapeutic action, for example with chlorella if I have mercury fillings, which wouldn’t be available when the chlorella is only one of 30 elements in the serving. Maybe in the damp of our west coast winters I would be better with the drying tendencies of wheat grass, whereas in the summer I can take the mentally stimulating spirulina, because the season is dry and thus the dampness of the algae is not an issue.

You’ve heard me say it before and I’ll say it again: more is not better. When I help someone choose a greens product I’ll point these things out and emphasize that since the serving sizes are generally roughly the same, the more ingredients just means less of everything. So I’ll steer them to a product with less ingredients rather than more. Have a look at the design of our Provide Smoothie: The algae are balanced by an equal amount of barley grass, none of the berries are tropical and all could be found growing within 500 miles of where you live. And the fiber and protein essentially turn the mix into a meal (even more so if you add a tablespoon of nutritional oil to it.) It’s not rocket science it is just a matter of keeping it simple.