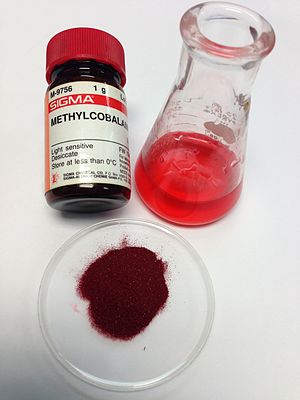 B12 Supplementation: Not Just for the Elderly

There are many people unknowingly dealing with the negative effects of vitamin B12 deficiency, never thinking that this may be a health issue simply because they are not yet elderly. Yet a number of factors can predispose us to poor B12 absorption, including certain ailments, genetic mutations, prescription drugs, and restricted diets. Let’s have a closer look at some of these factors, and see if any of them may relate to you.

YOUNG PEOPLE NEED B12 SUPPLEMENTS TOO

Just because you are not “old” does not mean that you may not have a vitamin B12 deficiency. This was clearly indicated by a recent analysis of the “Framingham Offspring Study”, which examined about 3,000 men and women, between the ages of 26 and 83, and found 39% of them to have plasma B12 levels in the “low normal” range (258 pmol/L), and 25% registered at well below that (185 pmol/L or less).

Currently, in the U.S., anything below 148 pmol/L is considered to be a clinical deficiency of vitamin B12, but the leader of this study, Katherine Tucker (Tufts University, Boston), pointed out that many people still show neurological problems when they fall into the accepted higher range of “low normal.”

Tucker stated that: “There is a question as to what the clinical cutoff for deficiency should be. I think there is a lot of undetected vitamin B12 deficiency out there.”

Tucker and her fellow researchers specifically chose to look at a wider age grouping than is normally considered when testing vitamin B12 levels. They wanted to see how younger people fared, since most B12 studies examine only the elderly, it being believed that they are the only ones at risk for B12 deficiency. (In a following blog I will go into more detail about why the B12 bar is set too low, and why the current B12 testing may be useless for a good portion of the population.)

So, clearly, just not being aged is no guarantee that our B12 status is good. One simple approach I often suggest to those who wonder if they do need to take B12, is to simply take a good sublingual B12 product for a while. See if you feel any distinct improvement in mood or energy levels, any reduction in inflammation, or a clearing of mental fog. If you feel noticeable effects you really needed the supplement, and if not, it can just be taken occasionally (once a week) for maintenance purposes.

A not uncommon genetic mutation can result in many people, from children to seniors, requiring much higher than normal levels of vitamin B12 in order to maintain their health.

The subject of methylation cycles is hot right now, but also fairly complicated, so I will only touch on it briefly. The proper operation of this biochemical pathway in the body is crucial for many functions including detoxification (by producing glutathione), energy production, DNA replication, immune function, neurotransmitter production, and preventing excessive inflammation (linked to many diseases). Thus a malfunction of the methylation function is linked to a number of serious health conditions including: Alzheimer’s disease; autism; autoimmune conditions; cancer; chronic fatigue; diabetes; heart disease; immune disorders; miscarriages; neurological conditions; and psychiatric disorders.

There is such a wide range of ailments linked to this methylation function because methyl groups turn our genes on or off, and turning the wrong gene on, and/or the right gene off (known as epigenetics), leads to states of disease.

One of the enzymes in the body necessary for proper methylation (methionine synthase), needs the active form of vitamin B12 (methylcobalamin), in order for proper functioning. If one has the genetic mutation that impedes methylation, their requirement for this form of B12 will be much higher than normal, since this enzyme will be using up B12 at a much faster rate than otherwise.

Many people have a genetic malfunction of this methylation cycle (perhaps as much as 40% of the modern population in the West), which can only be discovered through genetic testing. (See a Naturopath, or google “methylation testing”, to find out how to get tested.) If you, or any of your loved ones, have any of the conditions listed above, and nothing seems to work to alleviate symptoms, it is worth considering such testing.

Not long ago we at Nutristart received a call from a man who had used our liquid B12 product (Quick B12) on his autistic child, and found it to be of great benefit in reducing symptoms. This improvement was most likely a result of his child having the aforementioned malfunctioning methylation cycle.

One of the best sources of information on methylation and autism is the website of Dr. Amy Yasko, who specializes in treating autism based on it being a condition resulting mostly from the genetic mutation of the methylation pathways. She has had a great deal of success in doing targeted genetic analysis on autistic children, and then designing programs based on diet and nutritional supplements, specific to each child.

The study below looked at how B12 might help reduce symptoms of autism in a group of children aged from 3 to 8 years old. This was a 12-week, double-blind, placebo-controlled, cross-over clinical trial using injected methyl B12. All subjects received 6 weeks of placebo, and 6 weeks of methyl B12 at a dose of 64.5 mcg/kg every 3 days, injected into the buttocks.

While the study found that only 30% of the subjects demonstrated clinically significant improvement on the Clinical Global Impression Scale, in these cases these responders “exhibited significantly increased plasma concentrations of glutathione.” As mentioned above, B12 is essential for glutathione production via the methylation cycle.

Glutathione concentrations have been found to be low in children with autism. And, since glutathione is required to detoxify the body, and because many believe that heavy metals (especially mercury) are linked to autism, we can see great value in increasing glutathione production in such cases.

The conclusion of the study was: “detailed data analysis suggests that methyl B12 may alleviate symptoms of autism in a subgroup of children, possibly by reducing oxidative stress. An increase in glutathione redox status (GSH/GSSG) may provide a biomarker for treatment response to methyl B12. Additional research is needed to delineate a subgroup of potential responders and ascertain a biomarker for response to methyl B12.”  (J Altern Complement Med. 2010 May;16(5):555-60; “Pilot study of the effect of methyl B12 treatment on behavioral and biomarker measures in children with autism.” Bertoglio K, et al.)

VEGANS NEED TO SUPPLEMENT WITH B12

Advocates of vegan and vegetarian diets often maintain that these people do not need to supplement with vitamin B12 because it is found in certain vegetable foods (spirulina and tempeh being the most common examples), and their intestinal flora will produce it for them, even if they are not eating it.

Vitamin B12 is found only in animal foods (meat, fish, eggs, cheese, etc), and while it may look like it is contained in spirulina and tempeh, that form is in fact only an analog, which may look like B12 under a microscope, but in fact will not act as such within the human body.  (Read more of this article at beyondveg.com. )

Furthermore, there are no studies showing that vegans and vegetarians produce enough B12 from intestinal flora alone to meet their biological requirements. Indeed, studies on the subject reveal that the majority of strict vegetarian and vegan populations show levels of B12 well below normal, concluding that: “…with few exceptions, the reviewed studies documented relatively high deficiency prevalence among vegetarians. Vegans who do not ingest vitamin B12 supplements were found to be at especially high risk. Vegetarians, especially vegans, should give strong consideration to the use of vitamin B12 supplements to ensure adequate vitamin B12 intake.” (Eur J Clin Nutr. 2014 May;68(5):541-8; “The prevalence of cobalamin deficiency among vegetarians assessed by serum vitamin B12: a review of literature.” Pawlak R, et al.)

A recent study that analyzed two specific groups of vegans (“living-food” vegans and Natural Hygiene vegans), concluded that: “…in agreement with the average of all of the other studies, about 50% of vegans, measured cross-sectional have below-normal B12 status. The mounting evidence points toward the need for all vegans to supplement their diets with B12 or to monitor their vitamin B12 status.”

The authors of this study pointed out that it takes many years for obvious symptoms of B12 deficiency to show up, but more subtle metabolic testing (urinary MMA assay) shows evidence of insufficiency within a year or two after ceasing the intake of B12 from animal foods, or supplements.

Though the stores of B12 in the liver may not yet be depleted, the metabolism is beginning to be unfavorably altered at the cellular level due to the lack of newly ingested B12. They suggest that: “Early detection and supplementation among pure vegetarians is the best way to circumvent permanent neurological damage and disorders.”

OTHER CAUSES OF B12 DEFICIENCY

Vitamin B12 deficiency can also result from other conditions such as: atrophic gastritis, in which the stomach lining has thinned; pernicious anemia, which makes it hard to absorb vitamin B12; surgery that removed part of your stomach, or small intestine (including weight loss surgery); conditions that affect the small intestine, such as Crohn’s disease, celiac disease, or parasites; alcoholism; immune system disorders, such as Graves’ disease or lupus; long term use of drugs that suppress stomach acid.

THE QUICK B12 SOLUTION

NutriStart’s Quick B12 is a sublingual version of the active form of vitamin B12 (methylcobalamin). It comes in a good tasting, glycerin-based liquid, with 0.5ml (15 drops) providing 1,000mcg of B12. It contains no gluten, animal products, wheat, sweeteners, yeast, dairy, or artificial coloring.

Vitamin B12 requires intrinsic factor, a glycoprotein produced by the cells of the stomach, to absorb. Aging, poor digestive function, and other health factors can affect production of intrinsic factor.  Because of this tendency towards mal-absorption, doctors often use injections to provide patients with a guaranteed amount of B12.

Another way to bypass the need for intrinsic factor is to take the supplement under the tongue (sublingually), which allows it to enter the blood stream through the mucous membranes. Less painful than an injection, and just as effective, except in extreme cases, this simple method can be used without the need to see a doctor.

The earlier generation of supplemental vitamin B12 was known as cyanocobalamin, which worked okay for building red blood cells, but did not do much more than that. Since this form of B12 is an inactive form, it requires conversion by the body into the methyl form, in order to perform the other functions required by the methylation cycle, including its neuro-protective effects.

Quick B12 contains methylcobalamin, because it is the active form of B12, immediately available for use by the body, and with a broader range of benefits than cyanocobalamin. Studies comparing cyanocobalamin to methylcobalamin in cancerous rats showed that only the methyl form prolonged their lifespan.

« Green Tea Protects Us From Radiation, EMF’s And Alzheimer’s
Testing For Vitamin B12 »