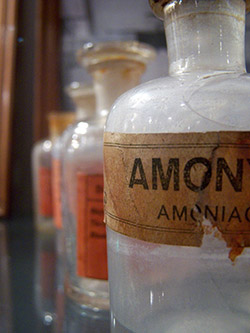 In part 2 of AMMONIA TOXICITY we are going to find out what we can do to remove ammonia from our body, both by supporting the organs involved in processing and disposing of it, and by taking supplements with an affinity for removing ammonia.

We have seen that there are 3 organ systems in the body that produce and/or deal with ammonia: the liver, the kidneys and the intestines. Let’s look at each one separately and see what we can do to facilitate their ammonia detoxification functions.

THE LIVER: FIRST LINE OF DEFENSE AGAINST AMMONIA

Removal of ammonia begins with the liver, therefore keeping the liver healthy and well functioning will clearly help to improve ammonia removal. Since a major medical indicator of liver failure is high levels of ammonia in the bloodstream, it follows that detoxifying the liver may well be the best way to remove ammonia from the body.

The liver normally receives some ammonia via the intestines, from the bacterial break-down of amino acids found in dietary protein. A healthy liver detoxifies that ammonia, by converting it into urea, which is then removed from the body by way of the urine. But, if the liver is malfunctioning, the ammonia remains unprocessed, and will enter the bloodstream.

To enhance the detoxification pathways, the liver uses sulfur compounds to produce the antioxidant glutathione. The amino acid L-cysteine is the most crucial sulfur compound needed by the liver to produce glutathione. The best way to get L-cysteine into the body, in supplemental form, is to use N-acetyl-cysteine. NAC is a powerful antioxidant and immune stimulant, and as well has been shown to support lung function, and to help remove heavy metals.

It should be noted that taking NAC is more efficient at raising glutathione levels than taking actual glutathione, in supplement form. Vitamin C is also a potent elevator of glutathione production, with 500mg being sufficient to create this response. Other supplements that can effectively raise glutathione levels include Milk Thistle Extract, Alpha Lipoic Acid, L-Glutamine and Whey protein. The highest food sources of sulfur compounds include members of the cruciferous vegetable family (broccoli, cabbage, cauliflower, kale, etc), as well as eggs, soy, legumes, garlic and onions.

THE ROLE OF THE KIDNEYS IN REMOVING AMMONIA

After the liver has detoxified the ammonia, by turning it into urea, the kidneys are the next step in filtration before it is removed via the urine.

Three amino acids, L-Arginine, L-Citrulline and L-Ornithine, are necessary components of the urea cycle, and are therefore believed to work as protective agents against ammonia toxicity. They do this by stimulating urea formation, which aids the kidneys in performing their detoxification function. All three of these amino acids may be purchased in supplemental form. But, of the three, L-Ornithine is particularly helpful for removing ammonia from the brain, because the brain does not contain the ornithine-related enzyme necessary to render ammonia harmless by changing it into urea.

Commonly suggested is 500mg of L-Ornithine in the evening and 500mg of L-Arginine in the morning to aid in neutralizing ammonia in the liver, the body and in urine. A larger quantity of these 2 amino acids may be taken, but remember to take them on an empty stomach.

As mentioned above, small amounts of ammonia are produced as a byproduct of the normal digestion of proteins, and the body is prepared to handle this quantity. However, parasites, bad bacteria, and candida yeast overgrowth in the intestinal tract, can produce more ammonia than the body is equipped to deal with, leading to a compromised immune system.

Taking probiotics (friendly bacteria) maintains healthy bacterial flora, which in turn, reduces yeast overgrowth, and lowers the pH level of the large intestine, making it far more acidic. This is a place where being acidic is good. When the large intestine has a high level of acidity, the ammonia produced by intestinal bacteria remains in an ionized form. In this form, it is easily dissipated from the body, without entering into general circulation through the blood, and burdening the kidneys, liver and brain.

Animal studies have confirmed that probiotics can reduce levels of urea and ammonia in the blood. The same studies also found the herb Yucca to work for reducing ammonia generation in the intestines. Yucca has a long history of being used to treat arthritic conditions. It is believed that yucca may work on arthritis by correcting the balance of intestinal bacteria, eliminating bad bacteria and normalizing good bacteria, leading to a reduction in inflammation.

Another beneficial supplement to fight ammonia excess is bentonite clay, which absorbs toxins out of the intestinal tract. This clay is commonly used in programs designed to fight candida yeast overgrowth, but as well it shows an affinity for ammonia ions. Bentonite comes premixed in liquid or can be purchased as a powder. It is considered to be most effective when taken mixed into liquid, as opposed to ingesting it in capsule form.

A serving of bentonite is one teaspoon of clay powder mixed into 2 oz of water (juice may be used if the water mixture is unpalatable to you) and shaken well. Use purified water but not distilled. This amount can be taken once or twice daily (morning and/or night) on an empty stomach for 2 to 4 weeks. Then take a break, and use occasionally, or every few months as part of a detox protocol.

OTHER WAYS OF REMOVING AMMONIA FROM THE BODY

Chlorophyll, the green pigment of plants, is a good blood cleanser, neutralizing toxins such as ammonia and carbon monoxide. Chlorophyll can be purchased as a liquid supplement, or is found in super foods, such as wheatgrass, barley grass and chlorella, which are more rich in nutrients than is chlorophyll alone.

The amino acid L-glutamine is another one of the most important nutrients that protects the brain and body from ammonia toxicity. The importance of glutamine is indicated by the fact that it is the most abundant amino acid found in the body. The body uses extra glutamine as a source of energy for the brain, if blood sugar levels dip too low, so again, we see the importance of maintaining stable blood sugar levels. On a more direct level, if blood levels of ammonia increase, the body uses more glutamine to reduce ammonia levels in the brain. L-glutamine also has a well-proven ability to elevate glutathione levels, which, as we saw in the section on the liver, is also an important part of ammonia removal.

Magnesium is required by the body in adequate amounts to help maintain blood sugar levels, which we have seen is important to helping the kidneys to perform their detoxification function. Magnesium also serves a function in glutamine metabolism, by activating glutamine synthetase, an enzyme that also helps to remove ammonia from the cells.

THE MEDICAL APPROACH TO REMOVING AMMONIA

The medical system uses two medicines to lower ammonia levels, when the situation is severe. One is the antibiotic “neomycin” which acts in the colon to kill the bacteria that break down proteins. The other is the sugar lactulose which reduces the absorption of nitrogen from the intestines. Lactulos, which is actually a laxative, also draws ammonia into the colon and then removes it though its laxative effect. Lactulose can cause dehydration so it is important to drink plenty of water if using it. These two agents would only be used in the most serious conditions of ammonia toxicity.

There is a medical test for high ammonia, which involves taking a blood sample from either a vein or an artery. The medical profession uses the ammonia test to help investigate the cause of changes in behavior and consciousness, to help diagnose the cause of a coma or of Reye’s syndrome, or to diagnose various liver or kidney diseases. However, this test will only determine if levels are severely high, not if levels are problematic, but not life-threatening. Another problem with this test is that brain levels of ammonia may be much higher than blood levels, something that can cause serious problems, but that will not be revealed by the blood test.

AMMONIA REMOVAL IDEAS FROM THE AQUARIUM

I part one I noted that fish will die quickly if there is too much ammonia present in their environment , because they have no way to detoxify it out of their bodies. Thus, fish tanks have filters powerful enough to filter and clean the aquarium of excess ammonia. Here the ammonia comes from the fish’s urine, and from tap water treated with ammonia (cloramine) and not neutralized by a specific liquid product, designed for this purpose (commonly available where aquarium supplies are sold).

So, fish owners must test the tank’s ammonia levels regularly, to ensure that the filter is functioning well and protecting their fish. Testing ammonia levels is a similar process to testing PH levels, but uses two solutions instead of just one. It is suggested that one do 2 or 3 ammonia tests to insure accurate results.

My point here is that, if we suspect that we have ammonia in our water supply, perhaps we can use the same system to check our water as fish owners do. Any aquarium shop will sell ammonia test kits, and it is recommended that for most freshwater fish, the ammonia level should not exceed 2 ppm (parts per million). According to the World Health Organization, ammonia levels in water of 0.1 to 1.0 ppm are typically found in most surface water supplies, and are safe for human consumption. So, if we detect levels much higher than this we know we have a problem.

Aquarium owners also often add Zeolite chips to aquarium filters in order to reduce ammonia levels. Zeolie is an absorbent porous mineral consisting mostly of silica and aluminum (a non-reactive form). It will trap and hold ammonia and other toxins, sort of like a sponge.

There are different grades of Zeolite, some of which are artificially created, but for ammonia removal we want a natural form, one which will have a high affinity for ammonia molecules. The one most recommended for these purposes is known as Clinoptilolite, or Clino. These chips are recharged by immersing them in a strong solution of non-iodized salt water, and then rinsed. If this is done, zeolite chips will last for many years.

Since, zeolite is commonly consumed as a supplement (used to remove heavy metals from the body), it should be a safe option for inexpensively filtering ammonia out of drinking water. We would just add the chips to the bottom of our water-filter pitcher at a level proportionally reduced from the level recommended for an aquarium. Some more research on your part would be required but, for example, if a certain amount is recommended for a 5 gallon tank, and your water filter contains 1 gallon, you would add one-fifth as much zeolite.

So, while there is yet another toxin to worry about, if we are diligent we can find solutions to cope with it. And modern living now seems to be a constant back and forth between new damaging technologies and poisons (thanks to science without a conscience), and finding a suitable response that protects us, or at least undoes most of the damage. From electro-smog and radiation, to GMO foods and xenoestrogens in the environment (all initially sold to us as safe technologies), we have no choice but to stay informed and do our research, if we wish to remain healthy and ahead of the game. Unfortunately in this game there are no winners but those who profit from the suffering of others.