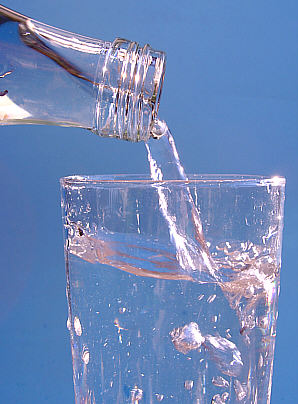 “Water, water, everywhere…nor any drop to drink”: The Rime of the Ancient Mariner.

This poor fellow is lost at sea and acutely aware of the irony of being surrounded by water but unable to drink it. He is the one with the Albatross tied around his neck, punishment from his shipmates for killing the bird that guided them to safety. Having destroyed the natural aspect that protected them they now all succume to death by thirst, trapped on their lost, idle ship. All die except the Mariner, who suffers much until he learns to love all of God’s creations “both great and small” and then is saved to forever tell his tale to others.

While the world prepares for the coming Water-Wars, we in Canada still have plenty of water, but difficulty in understanding which form is the healthiest way to drink it. Twenty years ago when I lived in California, nobody drank tap water. Even my trailer park friend, whose family lived off pop and junk food, knew enough not to drink the tap water. At that point most Canadians were not yet into bottled water, so I found it amazing that every corner store in California sold bottled water.

The original impetus behind not drinking tap water began with the discovery that chorine was a cumulative carcinogen. That is, like radiation, it is not how much you get in a day, but in a lifetime, that matters, and, like radiation, it can cause cancer. (As a related aside, we absorb chlorine better through our lungs than our stomachs, so we actually store more chlorine from a shower, than we would get from drinking gallons of water. A shower filter can be obtained at any London Drugs for about $30.) Of course, by this point the citizens of California were also aware of the growing groundwater contamination from their agricultural industry.

Well, as goes California, so goes the rest of the world eventually, as they are the fountainhead of fashion and trend, since the new nobility is represented in television and movies. Now the authorities are trying to reassure us that we have some of the best tap water in the world, and are creating a landfill crisis with the millions of extra plastic bottles that this new industry is leaving behind.

I began with the old fashioned Brita Filter, later upgrading to home delivered bottled water. This water was cleaned through reverse osmosis, via fine membrane filters, which at the time was believed to remove chlorine, pesticides and heavy metals, but was thought to leave behind trace minerals, important for good health. Years later a health professional convinced me that the R.O. water is stripped of all minerals, good and bad, and so becomes slightly acidic and more likely to leach plastic from the bottle. I then switched over to spring water, which tastes distinctively better, and I can see the minerals in the residue left in the pot which I regularly boil water in.

Some people are fans of distilled water, more so in the past than now. This process of evaporating and re-condensing the water leaves nothing but pure H2O. But it is believed that distilled water, because all minerals are absolutely absent, has a negative charge that draws minerals to it, in effect robbing your body of them. This is considered good for short periods during detoxification processes, but not so good in the long run, as it may pull good minerals, as well as bad ones, out of your body. Some scientists believe that this is ridiculous, since in the slurry of stomach acid and intestinal fluids the nature of distilled water would be altered anyway, and thus neutralized.

In the case of either reverse osmosis or distilled water, it seems to make sense to follow the recommendation that they be reconstituted with trace mineral drops (“Concentrace” being the superior product). This will fulfill the negative charge in the distilled water so that there is no potential for leaching of good minerals out of your body, and will re-alkalize the R.O. water. Because so much illness is related to acidic compounds in the modern life (sugars, chemicals, refined carbohydrates, tobacco, alcohol, coffee, etc), having our water be alkalizing is an important health attribute. Higher mineral waters are those derived from springs or glaciers.

Now I’m pretty happy with my new tasty spring water, conveniently delivered to my home. I have a ceramic dispenser so my water is at room temperature, rather than constantly chilled with the electric cooler systems. (Both Chinese and Ayurvedic health practitioners believe that cold beverages are unnatural and unhealthy.) Then the news about Bisphenol A comes out. Yet another hormone mimicking plastic molecule (“xenoestrogen”) this one also found in the high-density blue water bottles used for home delivered water, which we thought was the safest plastic.

So, I write my water company about this and they send a reasonably satisfying response, based on new European standards and information from plastic scientists. Within a few weeks, the Globe and Mail does a 2-page spread on the dangers of Bisphenol A, and demolishes the arguments from the water company. The safety test were done on rats that are not estrogen sensitive, even though it is a weak estrogen, humans, especially infants, are far more sensitive to this than the species of rat used in the studies. And high dose test do not have the same effect as low doses do on humans. Etc. Suffice to say it is time to have another look at home delivered bottled water as well.

Now we must look at regular store-bought bottled water. This water is a nicely recyclable PET plastic that unfortunately seems to leach antimony (a metal-like element used in the manufacturing of this plastic) into the water. This substance is toxic at high levels, its symptoms being similar to arsenic poisoning. Professor Shotyk, of Germany, first found this in Canada then confirmed it in European waters. Ground water has about 2 parts per billion of antimony, bottled water about 160 ppb and by six months later contains 630 ppb of antimony. European safety guidelines for antimony are at about 6 ppb, with the World Health Organization allowing 20 ppb.

The other important thing to remember about bottled water, and the reason that Japan rejected a number of Canadian water products, is that when the chlorine is removed bacteria can thrive in the water. So a good product will be ozonated, in essence increasing the amount of oxygen in the water to forbid bacteria from breeding.

So, water, water, everywhere, but what to drink? I’m beginning to think that the old fashioned Brita-style jug with carbon filter may be as good a choice as any and cheaper than most. These filters (www.waterfiltercomparisons.net) remove bacteria, chlorine, pesticides and most heavy metals, but leave in most of the trace minerals. This water can then be further alkalized by adding the trace mineral drops and further disinfected by using colloidal silver, grapefruit seed extract (though bitter) or iodine (see previous newsletter).

You will consider further disinfecting if you live in an area where the water may be contaminated with single-celled organisms (such as toxoplasma gondil), since the carbon filters will not remove these. This will also be necessary if you are cleaning up lake or stagnant water, in cases of emergency (earthquakes, etc.).

The carbon filters that one attaches to the faucet are not much different in structure than the replaceable units, but claim to last a year or more. Yet some studies have found that after just a few months they are teeming with bacteria. At least with the jug you change the filter on a monthly basis, preventing this problem. The water also does not sit in the jug for long periods of time, unlike store purchased and home delivery water, so there is less chance of any plastic leaching. It may even be possible to find glass jugs. Certainly for water needs while out and about, companies such as Sigg make ceramic coated, non-reactive portable water containers.

Finally, don’t forget the work of Dr. Emoto, who proved that thoughts influence the structure of water. Thus putting the words “Love” or “Thank you” on your water bottle can restructure its molecules to a form more like un-denatured wild spring or glacial water. Sounds crazy but he’s got the electron-microscope pictures to prove it. And to quote Will: “there are more things in heaven and earth Horatio, than are dreamt of in your philosophy.” Still every bit as true today as it was when written.